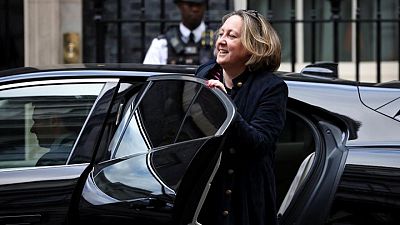 <div> <p><span class="caps">LONDON</span> – Improving digital trade would provide huge opportunities for British businesses and help boost economic growth, the government’s Board of Trade said, setting out how it aims to become a world leader in modern services and online goods.</p> <p>In a report on digital trade to be published on Friday, the board, headed by trade minister Anne-Marie Trevelyan, said the government should look to strike digital trade deals and help shape global trade rules suitable for the modern world.</p> <p>“By addressing digital protectionism on the global stage and championing a free, open, and competitive digital economy, more UK companies will be able to export their innovative, high-quality services and goods globally,” Trevelyan said in a statement. </p> <p>In October, Britain helped broker a deal between the Group of Seven wealthy nations on principles to govern cross-border data use and digital trade in a first step to reducing barriers.</p> <p>The Board of Trade, a government body tasked with championing exports and inward investment, said Britain should aim to build on the G7 agreement by working with partners to pursue a wider international consensus on digital rules, norms and standards. </p> <p>Digital trade is broadly defined as trade in goods and services that is either enabled or delivered digitally, encompassing activities from the distribution of films and TV to professional services.</p> <p>The report said Britain should focus particularly on securing Free Trade Agreements with the fast-growing Indo-Pacific market and large, service-based economies, as well as rapidly progressing the UK’s accession to the Comprehensive and Progressive Agreement for Trans-Pacific Partnership (<span class="caps">CPTPP</span>).</p> <p>It should also seek a Digital Economy Agreement with Singapore, viewed as a global leader on digital, in order to demonstrate the potential for digital trade rules to others in the World Trade Organization, it said. </p> <p/> </div>