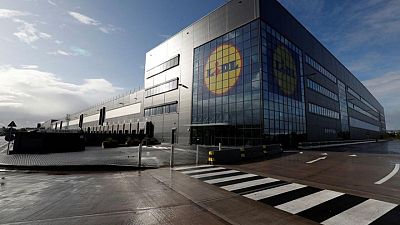 <div> <p>By James Davey</p> <p><span class="caps">LONDON</span> – Lidl GB’s boss said its German owner is not concerned about low profitability in the British business because it is investing for the long term, after on Wednesday setting a new target of reaching 1,100 stores by 2025.</p> <p>Britain’s food retail sector has been transformed in the past decade by the rise of Lidl and fellow German-owned discounter Aldi, which have driven down returns at the Big Four of Tesco, Sainsbury’s, Morrisons and Asda.</p> <p>Lidl GB said its turnover rose 12% to 7.7 billion pounds ($1.34 billion) in the year to the end of February 2021 and it made a pretax profit of 9.8 million pounds, versus a loss of 25.2 million pounds in 2019-20, during the period.</p> <p><span class="caps">CEO</span> Christian Härtnagel said the results were “only a snapshot” and Germany’s Schwarz group was more interested in the long-term opportunity, which was why Lidl GB had invested 498 million pounds in 2020-21.</p> <p>“Of course we have the full support of the parent group,” he said, adding Schwarz had made a “very strong statement” in favour of Lidl GB’s strategy by injecting another 268 million pounds of equity into the British business in 2020-21.</p> <p>Unlike its bigger rivals, but in common with Aldi, Lidl is opening lots of new stores but does not sell online.</p> <p>Lidl, which came to Britain in 1994, had a previous target of 1,000 stores by the end of 2023, which it said it was on track to reach. The new target would create 4,000 jobs, in addition to the 26,000 people it already employs.</p> <p>“We continue to see tremendous opportunity in the market,” said Härtnagel.</p> <p>‘<span class="caps">DISCOUNTER</span> <span class="caps">TIME</span>’</p> <p>Lidl GB has more than 880 stores, after opening 55 in 2020-21, and a 6.2% share of Britain’s grocery market, where retailers have been grappling with delays in international supply chains, compounded by labour shortages in the UK transport and warehousing networks.</p> <p>That has hit product availability and stoked inflation.</p> <p>Härtnagel said Lidl’s availability currently was “much better” than eight to ten weeks ago.</p> <p>“At the moment we are OK, but we are OK because we are working around the clock. There are no obvious categories where we are struggling at the moment,” he said.</p> <p>He said Lidl was not immune to inflationary pressures but would maintain its pledge to be the lowest priced grocer.</p> <p>“Inflation time is discounter time,” he added.</p> <p>($1 = 0.7482 pounds) </p> <p/> </div>