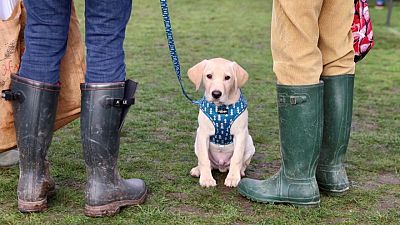 <div> <p> – British retailer Pets At Home said the number of households taking on new pets, which surged last year during <span class="caps">COVID</span>-19 lockdowns, is continuing to grow, driving up membership numbers and sparking a 77% jump in half-year earnings.</p> <p>The UK’s largest pet care retailer, which has 453 stores, said membership numbers of its puppy and kitten club more than doubled, with members typically spending a third more per annum than non-members. Active <span class="caps">VIP</span> members rose 13% to 6.8 million.</p> <p>Shares in Pets At Home, which said that fiscal 2022 earnings will be at the top end of market estimates, climbed 7%, and were among top midcap gainers by 1450 <span class="caps">GMT</span>.</p> <p>Lockdowns and work from home policies due to the spread of <span class="caps">COVID</span>-19 over the past two years have been accompanied by a surge in pet sales, making companies that operate in the animal care market among winners of the pandemic. </p> <p>3.2 million UK households have brought a pet home since the start of the pandemic, as per the latest report from the Pet Food Manufacturers’ Association (<span class="caps">PFMA</span>), a trade body representing the pet food industry. </p> <p>“Conditions don’t get much better for a pet superstore,” Hargreaves Lansdown analyst Sophie Lund-Yates said.</p> <p>“It seems ongoing flexible working, and perhaps the renewed popularity of rural living, have culminated in the trend having more room to run than initially thought.”</p> <p>The <span class="caps">PFMA</span> also estimates that around 17 million households were responsible for a pet’s welfare, meaning roughly one in four British households owned a pet compared to one in five American households.</p> <p>Pets At Home, which kept its stores, website and veterinary practices open for much of the pandemic, said new registrations at its high-margin veterinary practices business averaged at about 10,000 per week for the six months to Oct. 7. </p> <p>Half-year profits rose to 70.2 million pounds. </p> <p/> </div>