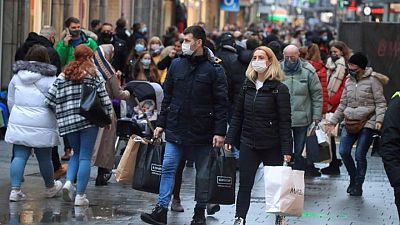 <div> <p>By Jonathan Cable</p> <p><span class="caps">LONDON</span> -Euro zone business growth unexpectedly accelerated this month but another wave of coronavirus infections and new restrictions, alongside price pressures, are likely to put a dent in December’s expansion, a survey showed on Tuesday.</p> <p><span class="caps">IHS</span> Markit’s Flash Composite Purchasing Managers’ Index, a good indicator of overall economic health, jumped to 55.8 in November from 54.2 in October.</p> <p>That exceeded all forecasts in a Reuters poll which had predicted a drop to 53.2. Anything above 50 indicates growth.</p> <p>“The flash <span class="caps">PMI</span>’s for November surprised to the upside in the euro zone, France and Germany,” said Rory Fennessy at Oxford Economics.</p> <p>“However, with cases rising sharply in some euro zone countries, the near-term outlook is quickly turning more pessimistic as risks of another dangerous wave of coronavirus ramp up. A deterioration in sentiment in December is likely.”</p> <p>Growth in Germany’s https://www.reuters.com/markets/europe/german-business-activity-picks-up-november-price-pressures-hit-record-high-pmi-2021-11-23 private sector accelerated slightly but persistent supply bottlenecks in manufacturing continued to weigh on factory output and pushed up inflationary pressures to unprecedented highs, earlier data showed.</p> <p>French https://www.reuters.com/markets/europe/french-business-activity-stronger-than-forecast-nov-flash-pmi-2021-11-23 business activity also expanded faster than expected, initial estimates showed, as the services sector of the euro zone’s second-biggest economy saw its quickest growth in almost four years.</p> <p>But European stocks https://www.reuters.com/article/instant-article/idUSL4N2SE1KI slumped to three-week lows on Tuesday as the resurgence of <span class="caps">COVID</span>-19 cases and rate hike concerns knocked sentiment.</p> <p>Federal Reserve Chair Jerome Powell’s https://www.reuters.com/markets/us/powell-tapped-second-term-fed-chair-2021-11-22 renomination has buoyed bets on U.S. rate hikes in 2022 while British businesses reported the fastest growth in new orders since June alongside record cost pressures, possibly paving the way for a Bank of England rate rise in December.</p> <p>The BoE https://www.reuters.com/world/uk/bank-england-be-first-major-bank-hike-rates-probably-december-economists-2021-11-12 will be the first major central bank to raise interest rates but whether that initial increase comes as soon as next month or if it waits until early next year divided economists polled by Reuters earlier this month.</p> <p><span class="caps">PRICE</span> <span class="caps">PRESSURES</span></p> <p>Supply bottlenecks caused by the pandemic have made it a sellers’ market for raw materials and the composite input prices index surged to 75.9 from 73.2, by far the highest since the survey began in mid-1998.</p> <p>Still, a <span class="caps">PMI</span> for the bloc’s dominant services industry rose to 56.6 from 54.6, well above all forecasts in a Reuters poll that had predicted a fall to 53.5.</p> <p>But optimism waned as renewed lockdowns are likely to have a bigger impact on services. The business expectations index sunk to 66.6 from 69.0, its lowest reading since February.</p> <p>Manufacturing activity remained robust and the factory <span class="caps">PMI</span> rose to 58.6 from 58.3. An index measuring output, which feeds into the composite <span class="caps">PMI</span>, increased to 53.8 from 53.3.</p> <p>Demand remained strong and factories were able to pass on some of the record increase in raw material costs to customers. The output prices index jumped to 74.3 from 72.6, the highest since the <span class="caps">IHS</span> Markit began collecting the data 19 years ago.</p> <p>“The surveys show price pressures remain intense, with the output prices <span class="caps">PMI</span>s for both manufacturing and services rising to their highest in almost two decades, consistent with our view that headline inflation will remain high for some time,” said Jessica Hinds at Capital Economics.</p> <p>The <span class="caps">PMI</span>s casts some doubt on the European Central Bank’s claim the rise in inflation is transitory. Euro zone inflation expectations are at risk of continuing to overshoot the Bank’s 2% target next year, according to a Reuters poll https://www.reuters.com/business/euro-zone-inflation-remain-above-ecbs-target-next-year-2021-11-12 earlier this month.</p> <p><span class="caps">ECB</span> board member Isabel Schnabel https://www.reuters.com/article/ecb-policy-schnabel-idUSKBN2I80FM told Bloomberg in an interview euro zone inflation would be higher next year than previously thought and there is a risk price growth could stay above the Bank’s target in the medium term.</p> </div>