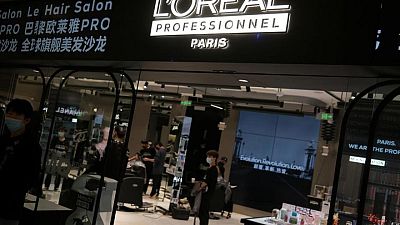 <div> <p>By Sophie Yu and Mimosa Spencer</p> <p><span class="caps">BEIJING</span>/PARIS – French cosmetics giant L’Oreal is offering shopping vouchers to some Chinese customers to settle a dispute over discounts that drew the ire of the country’s top two livestreaming sales stars, the pair said.</p> <p>Li Jiaqi, known as “lipstick brother”, and fellow top influencer Viya gave details of the compensation scheme to followers during a livestreaming event late on Thursday. L’Oreal Paris confirmed the details on its Weibo account in China. </p> <p>The duo this week said they had cut ties with L’Oreal after some followers said facial products the pair had promoted as carrying the biggest discounts of the year during Alibaba Group’s Singles Day shopping promotion could be bought for less days later on L’Oreal’s own platform.</p> <p>The spat has thrown the spotlight on the sway of popular culture personalities in China and how retail companies are relying on them to market products.</p> <p>Li, 29, who counts 47 million followers on his Taobao livestream room and Viya, 36, who counts 92 million, have risen to become two of the country’s most influential shopping hosts.</p> <p>Li started his career as a cosmetics counter sales person. He has built his popularity with entertaining and at times, critical commentary on cosmetics, famously trying on hundreds of lipsticks in one sitting.</p> <p>Viya, who won a popular singing contest in China early on in her career, shot to fame selling products ranging from fashion apparel to houses. </p> <p>She has grown her fan base with a laid-back, intimate conversation style, and has hosted Singles Day livestream shopping sessions featuring U.S. stars including Kim Kardashian, patching in from abroad.</p> <p>News that Viya and Li had suspended their collaboration with L’Oreal, giving the company 24 hours to come up with a plan to compensate customers who felt misled about shopping discounts, became one of the most viewed topics on China’s Twitter-like Weibo social media network on Thursday, with 450 million hits.</p> <p>According to the pair, L’Oreal is to offer a coupon of 200 yuan ($31) to consumers who spent more than 999 yuan over the last 11 days in October on facial masks at the center of the dispute, redeemable for any L’Oreal products. </p> <p>Those who purchased the facial masks but did not spend 999 yuan, are eligible for two coupons, worth 100 yuan each, that can be used when the buyer spends at least 499 yuan.</p> <p>L’Oreal, which apologised to customers for a “too complicated promotion mechanism”, said earlier it had found a constructive and satisfactory solution to address the complaints.</p> <p>According to Chinese media, Li and Viya pre-sold a combined 18.9 billion yuan ($2.96 billion) worth of goods on Oct. 20 in pre-Singles Day promotions. China is the biggest sales growth engine for luxury goods and cosmetics groups. </p> <p>($1 = 6.3881 Chinese yuan renminbi)</p> <p/> </div>