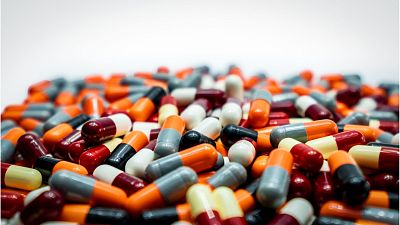 Each year, 33,000 people die from an infection due to bacteria resistant to antibiotics, according to the European Centre for Disease Prevention and Control (ECDC).

That’s equivalent to the total number of passengers of more than 100 medium-sized passenger planes.

Health officials in the UK this week have warned of a "hidden pandemic" of antibiotic resistant infections as a result of COVID-19 and changes in people’s behaviours.

Could we be facing a new crisis?

As November 18 marks European Antibiotics Awareness Day, we take a look at the drugs and what the implications of antibiotic resistance could mean for us all.

What are antibiotics for?

Antibiotics are used to treat or prevent some types of bacterial infections. They work by killing bacteria or preventing them from spreading. But they do not work for everything, according to the ECDC.

They may be used to treat bacterial infections that are unlikely to clear up without antibiotics, could infect others or carry a risk of more serious infections.

There are different types of antibiotics, but most of them can be classified into 6 groups according to the NHS. These range from penicillins, which are widely used to treat a variety of infections such as skin, chest and urinary tract infections, to aminoglycosides, which tend to only be used in hospitals to treat very serious illnesses, such as septicaemia.

They can come as tablets, capsules or a liquid that patients drink, but also as creams or drops when used to treat skin, eyes or ears infections. When taken as injections to directly reach blood or muscles, it's mostly to treat more serious infections.

The NHS recommends to "only ever take antibiotics prescribed for you – never 'borrow' them from a friend or family member".

How many antibiotics are consumed in European countries?

The latest data from the ECDC show a decrease in the total antibiotic consumption in humans by more than 15 per cent between 2019 and 2020.

This has been seen in most European countries, mostly in primary care, and most likely as a result of the COVID-19 pandemic, the European health watchdog highlighted.

In its annual epidemiological report, the ECDC noted that Greece, Romania and Bulgaria were the countries in which most people consume antibiotics for systemic use, on a defined daily doses scheme.

"Although a decrease in antibiotic consumption has been seen in the EU/EEA countries, preliminary findings from the eastern part of the WHO European Region and Central Asia indicate that over time, antibiotic use rose," Dr Hans Henri P. Kluge, WHO Regional Director for Europe, said.

"We know that access to antibiotics is a great concern, that over-the-counter sales still occur in parts of the European Region, that the antibiotics available are often the ones associated with the highest risk of developing resistance. COVID-19 is forcing us to fight health threats on multiple fronts, simultaneously. And antimicrobial resistance (AMR) is among the gravest of challenges".

The more patients use antibiotics, the more bacteria can resist them. This is called antibiotic (or antimicrobial) resistance.

Antibiotics were discovered at the turn of the 1930s-1940s and put into widespread use after the Second World War.

But over time, resistant bacteria have emerged due to genetic mutations. By eliminating vulnerable bacteria, antibiotics have a perverse effect: they allow their tougher counterparts to invade the field.

Another phenomenon is that resistant bacteria can pass on their characteristics to their neighbours who are still sensitive to antibiotics.

Antibiotic resistance is a natural phenomenon. But it is exacerbated by excessive or inappropriate use of these treatments, for example against seasonal flu, which is viral and not bacterial in origin.

Developed countries became aware of this twenty years ago with a wave of public campaigns such as the famous French slogan "Les antibiotiques, c'est pas automatique" ("Antibiotics aren’t automatic").

"Antimicrobial resistance is a silent pandemic that is happening here and now," Kyriakides added.

When antibiotics are no longer effective, there are very limited treatment options that may not work in all situations, sometimes leading to fatal outcomes, according to the ECDC.

With less effective drugs, a wide range of often deadly bacterial diseases, such as tuberculosis or many cases of pneumonia, may be less well cured. In this sense, antibiotic resistance kills.

European health authorities estimate that 25,000 people die every year in the EU as a result.

Resistance to last-line antibiotics can also compromise the effectiveness of life-saving medical interventions such as cancer and organ transplantation.

"Despite the focus on the ongoing pandemic, we need to keep up our efforts to further reduce unnecessary antibiotic use," ECDC Director Andrea Ammon said.

"We also need to improve infection prevention and control practices in hospitals and other healthcare settings to significantly reduce the spread of antimicrobial-resistant bacteria.

"And in the primary care sector, many infections can be prevented through vaccination, respiratory etiquette, physical distancing and hand hygiene, thus potentially contributing to a decreased need to use antibiotics".

Norway could back Bitcoin mining ban on environmental grounds