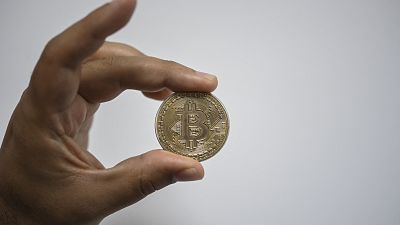 If Norway were to follow the lead of Swedish regulators, plans could involve a crackdown on activities like Bitcoin mining   -   Copyright  YURI CORTEZ/AFP
By Tom Bateman  •  Updated: 17/11/2021

Norway is considering policy measures that would tackle the environmental impact of crypto mining, a government minister has told Euronews Next.

"Although crypto mining and its underlying technology might represent some possible benefits in the long run, it is difficult to justify the extensive use of renewable energy today," Norwegian local government and regional development minister Bjørn Arild Gram said.

"We are currently considering potential policy measures in order to address the challenges related to crypto mining. In the context of this work we will look to the solutions proposed by the Swedish regulators, and our target would be common European regulations in this area," he added.

While Gram did not give details of the policies under consideration, if Norway were to follow the lead of Swedish regulators, plans could involve a crackdown on activities like Bitcoin mining which use significant amounts of electricity.

The European Commission, which would enforce any crypto regulation at an EU level, told Euronews Next it was encouraging the industry to "migrate applications" from energy-intensive proof of work blockchains to less demanding protocols like proof of stake and hybrid consensus models.

Gram's comments come after the directors of Sweden's financial services and environmental protection regulators called for an EU-wide ban on proof of work crypto mining, after a "several hundred per cent" rise in the energy usage of Bitcoin miners in the country between April and August this year.

"Sweden needs the renewable energy targeted by crypto asset producers for the climate transition of our essential services, and increased use by miners threatens our ability to meet the Paris Agreement," Erik Thedéen, director of the Swedish Financial Supervisory Authority, and Björn Risinger, director of the Swedish Environmental Protection Agency, said.

Both Norway and Sweden, as well as fellow Nordic nation Iceland, have become popular destinations for crypto miners, due to their plentiful renewable energy and low electricity prices.

Figures from Eurostat showed that in the first half of 2021, Norway had the lowest electricity cost for non-household consumers in the European Economic Area (EEA). Over 90 per cent of the country's energy comes from renewable hydroelectric sources.

"Overall, we want our renewable energy to be used in a way that creates value and that supports the transition to a climate neutral society," Gram said.

The opportunity cost of using renewable energy to power crypto mining became a hot topic in Norway after a 2016 decision to grant tax breaks to data centres in an effort to attract them to the country.

"How will the minister prevent Norway from becoming the world's Bitcoin mine and that the power consumption of a speculative economy displaces important power-intensive Norwegian industry?" he asked.

When Euronews Next asked the European Commission if it would support a Europe-wide policy banning proof of work mining, a spokesperson said it was already working to promote "more sustainable forms of blockchain technologies".

The Commission also said it had set "ambitious emission reduction targets" for the digital sector and promoted less energy-intensive blockchain technologies through funding for startups and direct development of a public sector blockchain network.

"The question of the impact of the use of crypto mining as a practice on energy use and emissions also has a strong international dimension," the spokesperson said.

"That said, the Commission is aware of developments in countries like China where cryptocurrency mining has been prohibited and will continue its regular discussions with member states, including Sweden and its authorities," they added.

The environment ministries of Sweden and Iceland did not respond to requests for comment.