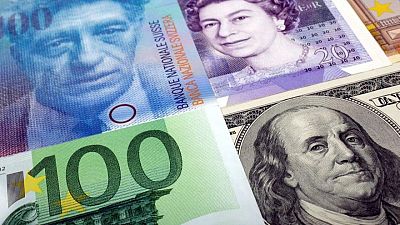 <div> <p>By Tommy Wilkes</p> <p><span class="caps">LONDON</span> – The dollar slipped back from a 16-month peak on Thursday, losing ground on the euro and Australian and New Zealand dollars as traders assessed whether the U.S. currency’s recent surge was starting to stall.</p> <p>The dollar has rallied in recent weeks as traders bet on tighter U.S. monetary policy. Stronger-than-expected inflation numbers in the United States last month and punchy retail sales data this week have added to those bets.</p> <p>And while volatility in FX markets remains low, it is markets’ assessment of global central banks’ differing responses to rising inflation that is driving currencies.</p> <p>The dollar index, which measures the currency against a basket of six rivals, hit its highest since mid July 2020 on Wednesday at 96.226 was last at 95.694, down 0.1% on the day.</p> <p>The euro, which was languishing near a 16-month low, rose 0.1% to $1.1334.</p> <p>The New Zealand dollar jumped 0.6% to $0.7041 after a central bank survey showed near-term inflation is expected to rise in the fourth quarter. </p> <p>The day before, sterling rose 0.5% to a one-week high against the dollar after a rise in Britain’s October inflation piled pressure on the Bank of England to hike rates at its meeting next month. </p> <p>The British currency was last at $1.3503, up slightly on the day. </p> <p>“Our core view is that the dollar can continue its rally against the low yielders, but that these mid-cycle dollar gains, should not stand in the way of some strong performance in the commodity FX space,” <span class="caps">ING</span> analysts said in a note.</p> <p>Other analysts said the dollar strength was not necessarily durable.</p> <p>“The sustainability of the current dollar strength beyond the next few months looks far from certain,” said Luc Luyet, FX strategist at Pictet Wealth Management. </p> <p>“Market expectations of the Fed are starting to be particularly hawkish, suggesting limited tailwinds for the U.S. dollar going forward from that factor.” </p> <p><span class="caps">TURKEY</span> <span class="caps">CENTRAL</span> <span class="caps">BANK</span></p> <p>The big event of the day in FX markets is the Turkish central bank meeting. Traders expect the bank to cut rates even in the face of inflation near 20% and a lira currency hurtling down to repeated record lows. </p> <p>However, the speed and scale of the lira’s decline – it is close to 11 lira per dollar from below 9.9 lira last week – may stay the bank’s hand, some traders think.</p> <p>Elsewhere, commodity-linked currencies were hurt by oil prices, which slumped to near six-week lows. </p> <p>The Canadian dollar was at a six-week low. Markets are expecting the Bank of Canada to start raising interest rates early next year. The Norwegian Crown also fell.</p> <p>The Australian dollar hit a six-week low of $0.7263 but later bounced back aided by the Kiwi’s rally and was last up 0.3% at $0.7286. </p> <p/> </div>