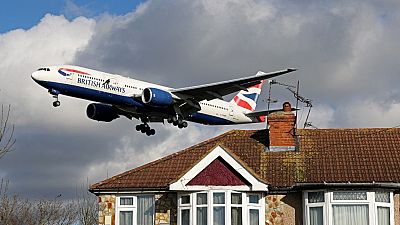 In the 1960s and 1970s, the tourism industry began to boom across Europe, but it wasn’t just the promise of travel that was causing a stir.

Increased noise from aircraft began to annoy local residents as airports, which were constructed in major cities when flight numbers were low, suddenly got a lot busier.

“Community groups who had previously lived quite peacefully next to their respective airports were impacted by a change in activity levels,” Tim Johnson, director of Aviation Environment Federation (AEF) told Euronews.

“That neighbour at the end of your garden was a very different beast in terms of noise impact.”

A sudden increase in landings, take-offs and flyovers unsurprisingly shocked and irritated locals. As a result, community groups formed to campaign for change; groups (including AEF) which are still around today.

The European Commission has identified noise pollution as a pressing issue and in 2020 released an impact report on its effects noise on urban populations.

The findings matter as, beyond annoyance, noise events such as these can cause serious health problems. The World Health Organisation (WHO) says disturbed sleep due to overflying planes causes hormonal and neural changes, which in turn affect the heart and blood pressure.

Hearing damage and hypertension are also common problems, and a study by Imperial College London found that the chance of being hospitalised due to a stroke or heart attack rose by 10 - 20 per cent for those living in a high noise zone.

Education can also be affected with a study in Germany finding that school children in affected areas learn to read slower.

“I think the bottom line here is that aircraft noise is increasingly seen as a health issue not a source of annoyance,” said Johnson. “Community frustrations that began in the 60s still exist today.”

What can the aviation industry do?

The WHO recommends that noise is reduced to below 45 dB during the day and 40 dB at night. But according to Johnson, campaigners would like these issues addressed in other ways.

“They want certain times of the day to be better protected, especially at night. They want to know there is an opportunity for greater involvement for them to comment.

“Some people would say there should be compensation and it does exist to a limited extent … there is some form of long protracted process.”

An EU directive instructs airports to have a five-year action plan and conduct local engagement on noise pollution. It also forbids aircraft that are too noisy are from flying in European airspace. Likewise, many airports introduce rules that disincentivise the use of old and noisy aircraft and adopt noise and use tracking systems.

The good news is that aircraft have generally gotten quieter as technological advancements have been made.

The two key sources of aircraft noise are engine noise and airframe noise. Engine noise has reduced over the last six decades with the introduction of new types of engines, acoustic liners and noise technologies.

Airbus’s A320neo reduces noise with a new engine and improved aerodynamics. The update has reduced noise by 50 per cent from the maximum 85 dB starting point of the previous A320 model.

Meanwhile, Boeing is working with NASA to see how quiet they can make their jets. They have also conducted special test flights on the 777 to generate acoustic maps that aid with noise reduction.

One of the significant limitations to reducing both CO2 emissions and noise is antiquated airspace, designed for a previous age.

On departure, there is a widely held belief within communities that higher is quieter and this is untrue, according to a noise reduction specialist at Airbus. Developments in technology mean some aircraft are capable of flying using alternative approaches - steeper, shallower and in a curve to name a few - but are limited by airspace.

Aircraft certification processes do involve noise assessments, and today's planes are 90 per cent quieter than those flown in the 1950s. However, the rate at which change happens isn’t always at the speed that afflicted communities would like.

“I think relying just on technology is limited,” said Johnson. “It is a very long term solution, incremental improvements in technology take time to filter into the average aircraft.

This issue has been compounded by the pandemic, during which fewer flights have been taking off and noise has been reduced for locals.

“People have had a taste of what life would be like without aircraft noise and they want fast change,” Johnson said.

“Of course, people want quiet aircraft but the fact that there are twice as many as 15 years ago means fewer noisy aircraft haven’t been much compensation for them.”