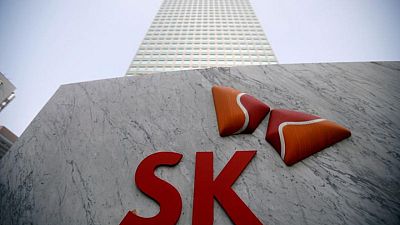 <div> <p>By Heekyong Yang and Joyce Lee</p> <p><span class="caps">SEOUL</span> – SK Innovation Co Ltd, owner of South Korea’s top refiner SK Energy, said on Friday that it expects steady fourth-quarter growth in refining margins as the <span class="caps">COVID</span>-19 pandemic recedes and demand returns.</p> <p>The company posted an operating profit of 619 billion won ($528.95 million) in the July-September quarter, swinging from an operating loss of 54 billion won in the same period a year earlier.</p> <p>Revenues rose 48% to 12.3 trillion won from a year earlier. That compares with the 12.6 trillion won forecast of analysts in the Refinitiv SmartEstimate. </p> <p>“The third quarter operating profit of petrochemical business edged up marginally as upward swing in crude prices and key product crack concentrated mostly in September,” SK Innovation said in a statement.</p> <p>SK Innovation, which has a total refining capacity of 1.115 million barrels per day (bpd) at plants in Ulsan and Incheon, said it operated 68% of its capacity on average in the third quarter, down from 72% a year earlier.</p> <p>Peer S-Oil Corp, whose main shareholder is Saudi Aramco, on Thursday predicted a continued uptrend in Asia’s refining margins in the fourth quarter as demand grows ahead of winter and <span class="caps">COVID</span>-19 restrictions ease.</p> <p>SK Innovation’s wholly-owned battery subsidiary SK On, which was split off on Oct. 1 https://www.reuters.com/business/autos-transportation/sk-innovation-shareholders-approve-plan-split-off-battery-business-2021-09-16, accounted for nearly 7% of the company’s revenue in the third quarter. </p> <p>The battery unit, which counts Ford Motor Co and Kia Corp among its customers, aims to turn profitable next year. </p> <p>SK On said it has an order backlog of about 1.6 terawatt hours (TWh)of batteries worth about 220 trillion won, reflecting the battery joint venture with Ford https://www.reuters.com/business/autos-transportation/ford-sk-invest-114-bln-add-electric-f-150-plant-three-battery-factories-2021-09-27, which could power about 23 million electric vehicles. </p> <p>In July, the company said its battery order backlog would be worth about 130 trillion won. </p> <p>Shares of SK Innovation were trading up 0.2%, versus the benchmark <span class="caps">KOSPI</span>’s 0.5% fall as of 0227 <span class="caps">GMT</span>. </p> <p>($1 = 1,170.2500 won)</p> <p/> </div>