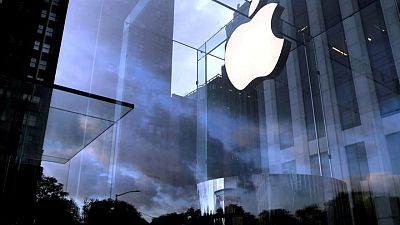 <div> <p>By Stephen Nellis</p> <p> -Supply chain woes cost Apple Inc $6 billion in sales during the company’s fiscal fourth quarter, which missed Wall Street expectations, and Chief Executive Tim Cook said that the impact will be even worse during the current holiday sales quarter.</p> <p>Cook told Reuters on Thursday the quarter ended Sept. 25 had “larger than expected supply constraints” as well as pandemic-related manufacturing disruptions in Southeast Asia. While Apple had seen “significant improvement” by late October in those Southeast Asian facilities, the chip shortage has persisted and is now affecting “most of our products,” Cook said. </p> <p>“We’re doing everything we can do to get more (chips) and also everything we can do operationally to make sure we’re moving just as fast as possible,” Cook said.</p> <p>Cook said the company expects year-over-growth for its quarter ending in December. Analysts expect growth of 7.4% to $119.7 billion.</p> <p>“We’re projecting very solid demand growth year over year. But we are also predicting that we’re going to be short of demand by larger than $6 billion,” Cook said.</p> <p>Shares of the Cupertino, California-based company, which had risen nearly 15% this year, fell 3.4% in extended trading on Thursday. The dip could make Microsoft Corp the world’s most valuable company after a run-up in Microsoft shares on the strength of its cloud computing business.</p> <p>Apple’s results were mixed in a fiscal fourth quarter seen as a lull before the high-sales holiday end of year. </p> <p>Apple said revenues and profits for the fiscal fourth quarter were $83.4 billion and $1.24 per share, compared with analyst estimates of $84.8 billion and $1.24 per share, according to <span class="caps">IBES</span> data from Refinitiv.</p> <p>The results were a rocky end to a fiscal year of above-expectations sales led by its iPhone 12 models and strong sales of Mac computers and iPads for working and learning from home during the <span class="caps">COVID</span>-19 pandemic. </p> <p>Apple told investors in July that chip constraints would start to hit its iPhone and iPad lineups for the first time in the fourth quarter.</p> <p>Apple posted its results shortly after retailer Amazon.com forecast holiday-quarter sales well below Wall Street expectations, citing labor supply shortages and global supply chain issues in part.</p> <p>Apple has “managed to navigate the problems fairly well, but hasn’t escaped unscathed, and an extended duration of these problems will spell trouble, especially because the market is unforgiving when it comes to Apple’s performance,” said Sophie Lund-Yates, equity analyst at Hargreaves Lansdown.</p> <p><span class="caps">MISSES</span></p> <p>Apple missed expectations in two key categories.</p> <p>Apple said fourth-quarter iPhone sales were $38.9 billion, short of estimates of $41.5 billion, according to Refinitiv data.</p> <p>Cook said that chips made with older technology remain the key supply constraint. He said that Apple remains unsure whether the shortages will ease after the holiday shopping season.</p> <p>“It’s very difficult to call,” Cook told Reuters.</p> <p>The company’s accessories segment, which contains fast-growing categories like its AirPods wireless headphones, came in at $8.8 billion, half a billion dollars lower than analyst expectations of $9.3 billion, according to Refinitiv data.</p> <p>Other segments fared better. Sales for iPads and Macs were $8.3 billion and $9.2 billion, compared with analyst estimates of $7.2 billion and $9.2 billion, according to Refinitiv data.</p> <p>The company’s services segment – which contains its App Store business – had sales of $18.3 billion in revenue, up 26%, compared with analyst expectations of $17.6 billion. Cook told Reuters that Apple now has 745 million paid subscribers to its platform, up from the 700 million it disclosed a quarter ago.</p> <p>“Services were strong, and it shows the beauty and durability of software and services, as there are better margins and no supply issues, since software doesn’t arrive on a container ship,” said Hal Eddins, chief economist at Apple shareholder Capital Investment Companies.</p> <p>Another bright spot in the company’s results were its sales in China, which were up 83% to $14.6 billion.</p> <p>The company said it returned $24 billion to shareholders during the quarter.</p> </div>