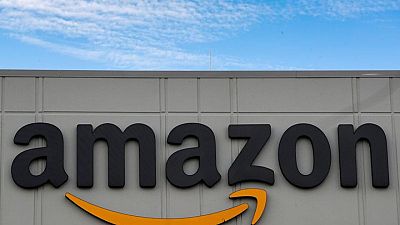 <div> <p>By Jeffrey Dastin and Nivedita Balu</p> <p> -Amazon.com Inc on Thursday reported a slump in profit that it expects will continue through the holiday quarter, as higher pay to attract workers and other operational disruptions diminish the company’s windfall from online shopping. </p> <p>Shares fell 4% in after-hours trade.</p> <p>After a year of blockbuster results, the world’s largest online retailer is facing a tougher outlook. In a tight labor market, it has boosted average U.S. warehouse pay to $18 per hour and marketed ever bigger signing bonuses to attract blue-collar staff it needs to keep its high-turnover operation humming.</p> <p>The company meanwhile is contending with global supply chain challenges. It has doubled its container processing ability, expanded its delivery partner program and has ramped up its warehouse investments – all at a noteworthy cost.</p> <p>The company said it expects operating profit for the current quarter to be between $0 and $3.0 billion, short of $6.9 billion Amazon posted the year prior. In the just-ended third quarter, net income fell by about 50% to $3.16 billion, a first since the start of the coronavirus pandemic in the United States.</p> <p>Andy Jassy, who became <span class="caps">CEO</span> in July, in a statement said Amazon was confronting higher shipping costs, increased wages and worker shortages. These labor challenges, plus lost productivity and cost inflation, added $2 billion to Amazon’s expenses in the quarter, an amount that’s expected to double in the holiday period.</p> <p>Amazon is “doing whatever it takes to minimize the impact on customers and selling partners this holiday season,” he said. “It’ll be expensive for us in the short term, but it’s the right prioritization for our customers and partners.”</p> <p>The retailer has strived to prevent a repeat of the 2013 season when delays left some without presents on Christmas Day.</p> <p>Amazon’s struggle to staff its warehouses spells challenges for rivals this holiday season. Retailers already have faced difficulty stocking their shelves with popular toys, gadgets and sneakers.</p> <p>Supply chain woes are also costing Apple Inc – $6 billion in sales during the company’s fiscal fourth quarter according to results released on Thursday. Apple Chief Executive Tim Cook said that the impact will be even worse during the holiday sales quarter.</p> <p>Michael Pachter, an analyst at Wedbush Securities, said Amazon’s supply chain challenge surprised him because he believed the company had plenty of products on its shelves to swap for those stuck on container ships.</p> <p>“I thought they would be fine because of selection,” he said. “Apparently that’s not true.”</p> <p><span class="caps">LABOR</span> <span class="caps">SHORTAGE</span></p> <p>Some analysts like Nicholas Hyett of Hargreaves Lansdown gave Amazon a pass. They say the company’s track record of high spending to deliver for customers has paid off in the long run.</p> <p>“Amazon has never been overly focused on the bottom line,” Hyett said.</p> <p>Still, Amazon <span class="caps">CFO</span> Brian Olsavsky said on a call with analysts that some costs were here to say. While the price tag for steel needed for warehouse construction had gone up, and while the company would look to procure such items more cheaply in the future, he said Amazon’s base wage increases might be permanent.</p> <p>He told reporters that Amazon had faced inconsistent staffing levels and that workers, not physical space, had become its primary capacity constraint in the third quarter. It wants to hire 150,000 more workers to meet U.S. seasonal demand this holiday.</p> <p>This constraint has had a ripple effect.</p> <p>“Inventory placement is frequently redirected to fulfillment centers that have labor to receive this product, which results in less optimal placement, which leads to longer and more expensive transportation routes,” he said.</p> <p>Staff are pushing for more, too. Around 2,000 workers in New York City petitioned this week for a vote on whether to make their warehouse the company’s first unionized facility in the United States.</p> <p>Olsavsky said Amazon had no announcement on whether to charge more for its loyalty club Prime subscriptions but added that the company always looks at that option.</p> <p>To juice revenue, the company began encouraging customers to shop holiday deals as early as Oct. 4 this year. Consumers have begun returning to pre-pandemic shopping levels, spending more on travel and services, Olsavsky said.</p> <p>The company forecast fourth-quarter sales to be between $130 billion and $140 billion. Analysts were expecting $142.05 billion, according to <span class="caps">IBES</span> data from Refinitiv. It missed expectations for third-quarter sales as well, witnessing its slowest growth since the <span class="caps">COVID</span>-19 outbreak.</p> <p>Amazon’s cloud computing division was a bright spot. Olsavsky said revenue growth re-accelerated for that business, and the company beat analysts’ expectations with net sales of $16.1 billion in the quarter. Amazon Web Services has seen sales rise with demand for gaming and remote work during the pandemic.</p> <p>Amazon’s total net sales rose to $110.8 billion in the third quarter; analysts had predicted $111.6 billion.</p> </div>