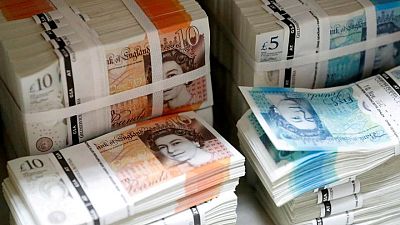 <div> <p>By Sujata Rao</p> <p><span class="caps">LONDON</span> -Sterling firmed on Thursday against the dollar, which lost ground after data showed weak economic expansion in the third quarter, though it slipped versus the euro following an <span class="caps">ECB</span> meeting which failed to dissipate bets on a 2022 rate hike.</p> <p>The pound has been buffeted of late by speculation over whether the Bank of England would proceed with an interest rate hike at its Nov. 4 meeting, or hold fire, given concerns around economic growth. </p> <p>Finance minister Rishi Sunak on Wednesday promised higher public spending, but his budget, while projecting robust 6.5% growth in 2021, also flagged inflation of almost 5% next year.</p> <p>While that appears to make a rate hike more feasible, the pound displayed little reaction, with focus staying on the possible longer-term economic growth hit stemming from supply chain disruptions, Brexit and potential monetary tightening.</p> <p>It raced higher on Thursday to the dollar, however, after U.S. data emerged showing the economy expanded at 2%, its weakest rate in a year. The dollar index fell 0.6% to the lowest in a month</p> <p>By 1600 <span class="caps">GMT</span>, sterling was up 0.5% to $1.3779, having earlier traded as high as $1.38150. </p> <p>Against the euro, the pound slipped 0.3% at 84.65 pence, but held off 20-month highs hit earlier this week on bets around diverging central bank interest rate expectations. </p> <p>Markets are pricing in a cumulative 34 bps in rate hikes from the BoE by year-end, while the European Central Bank is expected by economists to stay on hold for some years despite markets pricing two rate hikes by end-2022.</p> <p>At the <span class="caps">ECB</span> meeting, its chief Christine Lagarde pushed back against rate hike bets but admitted inflation would be high for longer. Some saw her statement as too timid. </p> <p>It helped the euro strengthen against the dollar and pound, while southern European bond yields rose.</p> <p><span class="caps">HAWKISH</span> <span class="caps">MESSAGE</span> </p> <p>However, while the pound has risen in October, many doubt it can build on those gains without a significantly hawkish message from the BoE next week.</p> <p>“There are obvious headwinds to <span class="caps">GBP</span> given the amount of tightening that has been priced into the UK rates curve, but this will not be the moment for a dovish hike,” BofA economist Robert Wood, who now expects a 15 basis-point <span class="caps">BOE</span> rate hike next week, said.</p> <p>While some fear BoE tightening will further pressure growth, Wood said it was too early to call it a policy mistake. But he added: “The UK faces an intense supply shock driving growth and inflation in opposite directions.”</p> <p>Another potential source of pound pressure is post-Brexit wrangling between Britain and the European Union, which alongside supply chain issues may cap growth.</p> <p>While EU-UK talks are ongoing around Northern Ireland, fishing disputes took another turn, with France seizing a British trawler fishing in its territorial waters without a licence.</p> <p>Paris is threatening to impose extra customs checks on British goods entering France from next week if the fishing spat is not resolved. That raises risks of more economic pain before Christmas for Britain. </p> <p>Analysts at Berenberg noted that, despite optimistic budget growth projections, expectations further out remain gloomy. </p> <p>“(The budget office) has not upgraded its still pessimistic view on the UK’s longer-run economic prospects. Growth remains at around the 1.6-1.7% rate by the end of the forecast,” they added.</p> </div>