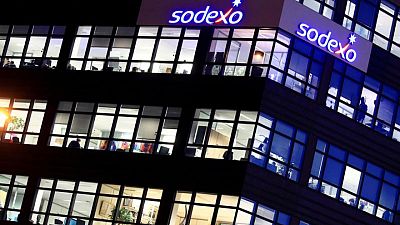 <div> <p>By Diana Mandia and Federica Mileo</p> <p> -French catering and food services group Sodexo said on Wednesday it expects sales to accelerate in 2022 and will resume dividend payments after posting better-than-expected annual results.</p> <p>The company, which operates in 56 countries, reported a 12.4% jump in annual core profit to 578 million euros ($672.68 million), on revenues edging down to 17.4 billion euros – both slightly beating forecasts.</p> <p>Sodexo cited the acceleration in cornavirus vaccination programmes across its markets as the driving force of restaurant reopenings. By the fourth quarter, the group reached 87% of its annual activity in 2019, it said.</p> <p>The company remains confident in its capacity to continue the recovery momentum to pre-<span class="caps">COVID</span> levels, and expects organic growth between 15% and 18%, as well as an operating margin of close to 5% at constant rates for its 2022 fiscal year.</p> <p>A boost in growth in the United States, the accelerated deployment of the new food model based on digital solutions and the active portfolio management will help Sodexo return to regular and sustained growth, it said.</p> <p>Shares in the company jumped 6.6% at 0747 <span class="caps">GMT</span>.</p> <p>The caterer will pay a dividend of 2 euros ($2.33) for the year ended Aug. 31, including an exceptional 0.80 euro linked to the disposal programme, becoming the first leisure stock to resume dividend, Bernstein analysts said in a client note. </p> <p>The <span class="caps">COVID</span>-19 crisis cost Sodexo a further 2 billion euros in revenue, Chief Finance Officer Marc Rolland said during a call with analysts. </p> <p>“In China, we’ve recovered well. And in Brazil we’ve almost never lost because our sector exposure was very industrial and the factories were running in Brazil and we continued to operate throughout the pandemic,” he said, adding the U.S. market still lags on back-to-office trend.</p> <p>Sodexo launched a search in July for a new chief executive to replace Denis Machuel, and aims to fill the post before the end of 2021.</p> <p>“We are past the stage of the long list,” interim <span class="caps">CEO</span> Sophie Bellon said on a call with journalists.</p> <p>($1 = 0.8593 euros)</p> </div>