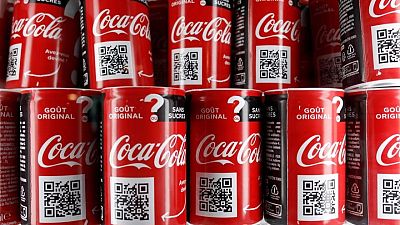 <div> <p>By Uday Sampath Kumar</p> <p> -Coca-Cola Co raised its full-year profit forecast on Wednesday, banking on higher prices and demand for its sodas globally to counter rising costs due to supply chain disruptions.</p> <p>The company’s shares rose 2.3% to $55.70, as a rebound in demand for its soft drinks, due to the reopening of public venues such as theaters, stadiums and restaurants across the world, led to a 16% jump in third-quarter revenue.</p> <p>While demand is expected to remain strong, Chief Financial Officer John Murphy said Coca-Cola was not immune to cost inflation in 2022 or the business impact of potential new lockdowns in some markets due to a spike in <span class="caps">COVID</span>-19 cases.</p> <p>“We do see the world emerging from the crisis a bit like an earthquake. You get more aftershocks, but the consequent aftershocks tend to be smaller than the early ones. And that’s kind of how we see 2022,” Murphy said.</p> <p>The beverage giant said it would rely on more marketing expenditure to boost demand, as well as higher prices to get around any potential “aftershocks” related to the pandemic.</p> <p>Other companies, including rival PepsiCo Inc and consumer goods giant Procter & Gamble Co, have said that they would have to increase prices again to counter the impact of surging commodity and freight costs.</p> <p>“A lot of the things Coke has done operationally, like reduce the number of products that they have and focus on faster growing products, should help at least mitigate some cost inflation,” Edward Jones analyst John Boylan said.</p> <p>The company expects its annual adjusted earnings per share to rise 15% to 17%, compared with a prior forecast of a 13% to 15% increase.</p> <p>On an adjusted basis, Coca-Cola earned 65 cents per share in the third quarter, beating estimates of 58 cents, according to <span class="caps">IBES</span> data from Refinitiv.</p> </div>