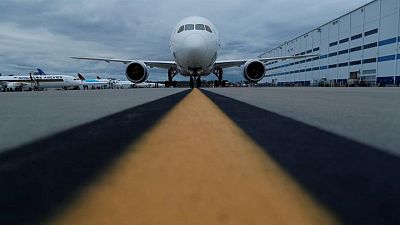 <div> <p>By Sanjana Shivdas and Eric M. Johnson</p> <p> – Boeing Co reported a quarterly net loss after fresh charges on its problem-plagued 787 and Starliner spacecraft programs, masking a small underlying profit as air travel recovers from the pandemic.</p> <p>The 737 <span class="caps">MAX</span> and 787 are integral to Boeing’s ability to rebound from the pandemic and a safety scandal caused by two fatal crashes, while its Starliner has fallen behind dominating space rival Elon Musk’s SpaceX.</p> <p>Boeing shares were down 1.6% to $206.40 in midday trading, against a fractionally lower Dow Jones Industrial Average.</p> <p>“We have a clear line of sight to the steps ahead” on resuming 787 deliveries, Chief Executive Dave Calhoun told analysts on a conference call but gave no specific timeline pending regulatory approvals.</p> <p>Boeing said the price tag for inspections and repairs due to 787 structural defects amassed over the last two years would be roughly $1 billion – or $183 million in the quarter, confirming for the first time estimates reported by Reuters in February.</p> <p>It has twice halted 787 deliveries, with the latest stoppage ongoing since May and resulting in an inventory of more than 100 jets worth $9 billion cash.</p> <p>Boeing also booked a charge of $185 million on its long-delayed Starliner astronaut capsule for <span class="caps">NASA</span>’s Commercial Crew Program, due to delays and repairs from faulty fuel valves that sidelined the spacecraft after its August flight attempt.</p> <p>Meanwhile, SpaceX’s Dragon capsule has ferried astronauts and supplies to orbit four times.</p> <p>Revenue rose 8% to about $15.3 billion, fueled by 737 <span class="caps">MAX</span> deliveries and growth in Boeing’s services unit as it sees recovery in the air travel market.</p> <p>Boeing delivered 62 of its 737s in the quarter, with some 370 of its 737 <span class="caps">MAX</span> jets in inventory, a third of which were for customers in China, executives said.</p> <p>It is meanwhile building 19 of the jets monthly, up from 16 in last quarter, with ongoing plans to push to 31 per month in early 2022.</p> <p>On the prospect of ramping to 50 or more jets monthly, Calhoun said, “The wild card in this one isn’t demand. It’s all about the supply chain. Whether it’s two, three or four years, I’m not sure. I do think we get there.”</p> <p>Rival Airbus SE is charging forward with planned production increases to a record 64 per month by second-quarter 2023, with possible further increases beyond that. Its plans have produced a backlash from suppliers and leasing companies.</p> <p>Calhoun struck a cautious note, telling analysts the whole industry would face narrowbody supply constraints from the second half of 2022 and lasting through 2023. </p> <p>Boeing has been producing about two 787 jets monthly at its South Carolina factory with plans to go back to an already slow rate of five a month at some future point – analysts expect that to take a year. </p> <p>On forthcoming jets, Boeing began engine performance flight tests earlier this month on its already years-delayed 777X mini-jumbo, and still expects a first delivery in late 2023, and is evaluating the launch timing of a freighter version, Calhoun said. </p> <p>Chicago-based Boeing reported a net loss of $132 million, compared with a loss of $466 million a year ago, but a core operating profit of $59 million. </p> <p>An adjusted loss of 60 cents per share compared with analysts’ average estimate of 20 cents per share, according to Refinitiv data.</p> <p>Quarterly free cash flow of negative $507 million compared with negative $5 billion a year ago, while Boeing’s mountain of debt fell to $62.4 billion from $63.6 billion. </p> <p/> <p>(This story refiles to add chief executive’s first name, title, paragraph 4) </p> <p/> </div>