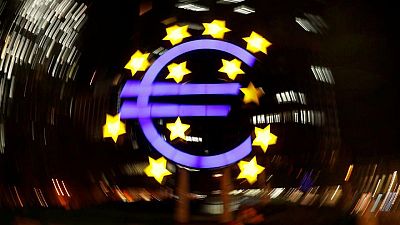 <div> <p>By Abhinav Ramnarayan</p> <p><span class="caps">LONDON</span> -Euro zone inflation expectations among bond investors hit a new seven-year high above 2.07% on Tuesday, shooting past the European Central Bank’s target on the back of soaring oil prices and supply chain crunches around the world. </p> <p>Oil prices reached multi-year highs this week on the back of tight global supply and strengthening fuel demand.</p> <p>This comes on top of several months of high inflation readings in the euro zone and beyond, putting pressure on the <span class="caps">ECB</span> ahead of its policy meeting next Thursday and as it considers how much monetary support to provide the bloc’s economy once its pandemic bond-buying expires next March. </p> <p>An important market gauge of long-term euro zone inflation expectations, the five-year, five-year forward inflation swap rose as high as 2.0762%, the highest since early August 2014.</p> <p>“Rising inflation swaps will be a key topic at Thursday’s <span class="caps">ECB</span> meeting,” analysts at <span class="caps">ING</span> wrote in a note. “The persistent inflation scare is seeing expectations tilt towards tighter policies, and any pushback by the <span class="caps">ECB</span> may remain confined to the very front-end pricing.” </p> <p>German real, or inflation-adjusted, 10-year bond yields fell to a new low of -2.00%, a full percentage point below U.S. real 10-year yields. U.S. 10-year breakevens meanwhile, the market-based measure of expected inflation, rose to the highest since 2006 at 2.67%.</p> <p>Euro zone government bond yields, while relatively unchanged on Tuesday, have risen sharply in recent weeks with persistently higher consumer prices leaving investors with little choice but to price in tighter policy. </p> <p>Germany’s 10-year bond yield, the benchmark for the bloc, is 30 basis points higher at -0.11% compared with where it was two months ago.. It was steady on the day after dipping to a one-week low on Monday when data showed a steep decline in German business morale. </p> <p>Earlier on Tuesday, Reuters quoted sources as saying the German government had cut its growth forecast for this year to 2.6% from the previous 3.5%</p> <p>So far, most euro zone yields have risen more or less in sync with each other. Italy, one of the lowest rated countries in the euro zone, has seen its bond yield spread over Germany remain more or less steady between 100 and 110 bps. </p> <p>However, ratings agency S&P Global suggested last week that the country’s positive ratings outlook is partly dependant on <span class="caps">ECB</span> support. </p> <p>“Sovereign spreads are likely the most vulnerable should there be any shift in focus towards any larger-than-anticipated scaling down of <span class="caps">ECB</span> purchase programmes – in size or flexibility,” the <span class="caps">ING</span> analysts said. </p> </div>