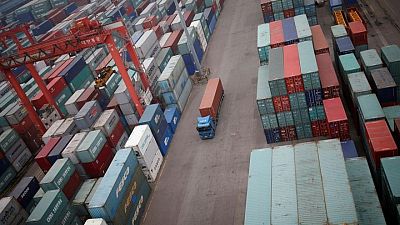 <div> <p>By Vivek Mishra</p> <p><span class="caps">BENGALURU</span> – South Korea’s economic growth likely slowed a bit in the third quarter as robust exports were partially offset by subdued domestic demand due to the spread of the Delta coronavirus variant, a Reuters poll found.</p> <p>Asia’s fourth-largest economy is expected to have expanded by a seasonally-adjusted 0.6% in the third quarter from the previous three-month period, according to the median forecast of 12 economists, after growing 0.8% in April-June.</p> <p>On a year-on-year basis, gross domestic product (<span class="caps">GDP</span>) likely expanded 4.2%, down sharply from the second quarter’s 6.0% pace, which was the fastest in a decade. The data will be released on Oct. 26.</p> <p>“Domestic exports and facility investment continued to support growth, while private consumption has been somewhat sluggish in the third quarter due to the re-spread of <span class="caps">COVID</span>-19 in Korea,” said Chun Kyu-yeon, an economist at Hana Financial Investment in Seoul.</p> <p>“Although a recovery from global supply disruptions is being delayed and risks related to the Chinese economy persist, consumption is expected to improve thanks to government policy support and the transition to the phase where we live with coronavirus.”</p> <p>Still, the South Korean economy is expected to lose momentum next year amid waning pandemic-related stimulus and the economic slowdown in China, the country’s largest trade and investment partner.</p> <p>“It is quite worrying what is happening in China and it is clearly a big downside risk. The preliminary risk is limited for now but we have to wait and see,” said Stephen Lee, chief economist at Meritz Securities in Seoul.</p> <p>Growth is forecast to average 4.0% this year, a sharp rebound after the economy shrank 1.0% last year, its first contraction in over two decades, according to a separate Reuters poll published earlier this month. But growth was expected to ease to 3.0% next year and then to 2.6% in 2023.</p> <p>South Korean exports grew strongly in October, soaring 36.1% from a year earlier. Exports to China, the United States and European Union rose 30.9%, 37.1% and 42.1%, respectively, during the period.</p> <p>Those trade figures will be closely watched by the Bank of Korea ahead of a widely-expected interest rate hike to 1.0% at its next meeting on Nov. 25. </p> <p>“The strength of the external sector adds weight to our view that the economy will expand faster, and the central bank will tighten more quickly,” said Alex Holmes, Asia economist at Capital Economics in Singapore.</p> <p/> </div>