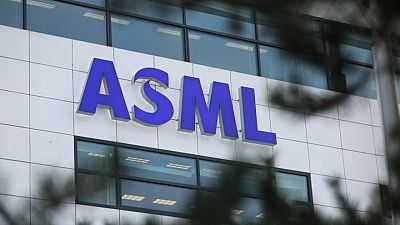 <div> <p>By Toby Sterling</p> <p><span class="caps">AMSTERDAM</span> -<span class="caps">ASML</span> Holding NV, a key supplier to computer chip makers, posted slightly better-than-expected quarterly net income of 1.74 billion euros ($2 billion) on Wednesday, amid strong demand for its products and a global semiconductor shortage.</p> <p>Analysts had forecast a net income of 1.6 billion euros for the third quarter ended Sept. 30, according to Refinitiv data. </p> <p>Revenue came in at 5.24 billion euros. In the third quarter of 2020, <span class="caps">ASML</span> had reported a net income of 1.1 billion euros on revenue of 3.96 billion euros.</p> <p>“Demand continues to be high,” Chief Executive Officer Petter Wennink said in a statement. </p> <p>Digital transformation and chip shortages fuel the need to increase capacity to meet the current and expected future demand for both logic and memory chips, Wennink said.</p> <p><span class="caps">ASML</span> dominates the market for lithography systems, machines that cost up to 150 million euros each and that use focused beams of light to help create the circuitry of semiconductors. </p> <p>The company on Wednesday forecast fourth-quarter sales of 4.9-5.2 billion euros at a gross margin of 51%-52%. Wennink repeated the company’s full-year target of 35% sales growth.</p> <p>At a meeting with investors in September, the company said it was benefiting from “megatrends” in the electronics industry and also raised its long-term forecasts, estimating full-year revenue would hit 24-30 billion euros ($28 billion-$35 billion) in 2025, with gross margins of up to 55%. </p> <p>The company is expanding its capacity as semiconductor makers expand theirs to address the global chip shortage. Key customers include all major chip makers such as <span class="caps">TSMC</span>, Samsung and Intel.</p> <p><span class="caps">ASML</span>’s stock has reflected the strong outlook with a market capitalisation of around 280 billion euros, making it Europe’s largest technology company.</p> <p>Shares closed at 683 euros in Amsterdam on Tuesday, and have outperformed the sector with a 72% year-to-date jump.</p> <p>($1 = 0.8585 euros)</p> </div>