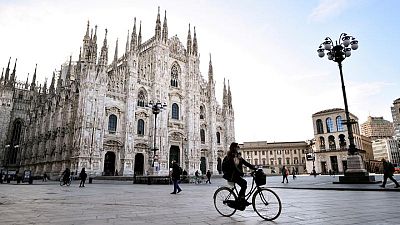 <div> <p>By Giuseppe Fonte and Gavin Jones</p> <p><span class="caps">ROME</span> -Italy on Wednesday slashed its public debt forecast for this year to 153.5% of national output from its previous view of 159.8% set out in April, reflecting a stronger than expected economic recovery from the <span class="caps">COVID</span>-19 crisis.</p> <p>The latest target, contained in the Treasury’s twice-yearly forecasting exercise, would mark a decline from the post-war record of 155.6% of <span class="caps">GDP</span> registered in 2020. The downward trend is projected to continue to 149.4% in 2022.</p> <p>The Economic and Financial Document (<span class="caps">DEF</span>) forecasts Italian economic growth of 6.0% this year, a partial recovery following the record contraction of 8.9% in 2020 when the economy was hobbled by <span class="caps">COVID</span>-19 lockdowns.</p> <p>“The economic picture is much better than what we ourselves thought it would be in the spring,” Prime Minister Mario Draghi told reporters after his cabinet signed off on the document.</p> <p>“There is confidence in Italy, among ourselves and also in the rest of the world,” he added.</p> <p>Economic output will recover to above its pre-pandemic level in mid-2022 thanks to another year of robust growth, pencilled in at 4.7%. </p> <p>In the near term, the third quarter of this year will see growth of 2.2% from the previous three months, the <span class="caps">DEF</span> forecast, following a 2.7% expansion in the second quarter.</p> <p>Draghi said the latest forecasts confirmed that the best way to lower Italy’s massive public debt, proportionally the highest in the euro zone after Greece, was by boosting growth.</p> <p>He promised the government’s 2022 budget to be presented next month will be “strongly expansionary.”</p> <p>The document highlighted numerous risks to the growth outlook, including the possible emergence of new <span class="caps">COVID</span> variants, raw materials shortages and the recent surge in energy prices.</p> <p>Nonetheless, it said the planned return to pre-pandemic conditions, economic reforms and billions of euros of European Union recovery funds should ensure that growth and employment remain “well above the trend seen in the last decade”.</p> <p>Italy has been the euro zone’s most chronically sluggish economy since the start of monetary union.</p> <p>The budget deficit is targeted in the <span class="caps">DEF</span> at 9.4% of <span class="caps">GDP</span> this year, little changed from last year’s level of 9.6% and down from an April forecast of 11.8%.</p> <p>The deficit is forecast to narrow to 5.6% next year and to stand at 3.3% in 2024, still above the 3% ceiling set out in the European Union’s Stability Pact, which is currently suspended due to the <span class="caps">COVID</span>-19 crisis. </p> <p>The 2022 deficit would be 4.4% of <span class="caps">GDP</span> under an unchanged policy scenario, the <span class="caps">DEF</span> showed, allowing the government to finance additional spending of 1.2% of <span class="caps">GDP</span>, or some 22 billion euros ($19 billion). </p> <p>($1 = 1.1714 euros)</p> </div>