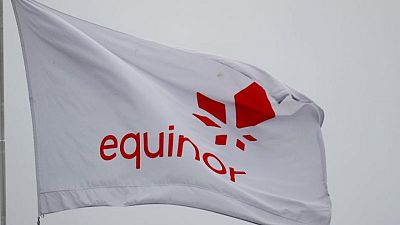 <div> <p><span class="caps">OSLO</span> – Norway’s Equinor and Russia’s Rosneft have agreed to cooperate on cutting emissions of greenhouse gases from their joint oil and gas projects in Russia, the two energy firms said on Wednesday.</p> <p>The companies will seek to reduce emissions of methane and CO2, including by ending the routine flaring by 2030 of gas that comes as a by-product of oil production.</p> <p>They will also explore alternative energy such as wind turbines to power oil and gas installations and seek to apply carbon capture and storage to prevent emissions of climate-warming gases, the companies said.</p> <p>“We are happy to work together with Rosneft and share best practice to address climate change,” Al Cook, Equinor’s head for international exploration and production, said in a statement.</p> <p>Equinor produces about 23,000 barrels of oil equivalent per day in Russia, a tiny fraction of its total global output, according to the company’s website.</p> <p>The Norwegian company’s cooperation with Rosneft includes the heavy oil and gas field North Komsomolskoye in West Siberia and the Severo-Danilovskoe oil and gas condensate field.</p> <p>Equinor, previously called Statoil, signed a strategic cooperation with Rosneft in 2012. The plans had to be scaled down however due to Western sanctions imposed on Moscow for Russia’s annexation of Crimea from Ukraine in 2014.</p> <p/> </div>