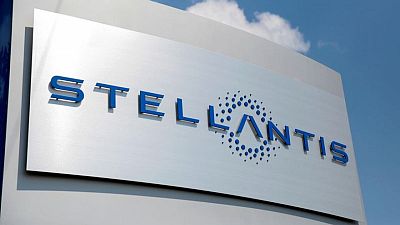 <div> <p>By Gilles Guillaume</p> <p><span class="caps">PARIS</span> – Two leading trade unions at Stellantis on Tuesday criticised the way the carmaker is implementing a furlough scheme aimed at mitigating the impact of a fall in output brought on by a global chip shortage.</p> <p>Stellantis and other carmakers have been hit by a series of supply chain disruptions during the <span class="caps">COVID</span>-19 pandemic, including chips which are key components in car manufacturing. Stellantis extended production halts at several European plants in late August.</p> <p>The French furlough deal, agreed by four unions at Stellantis, enables the company to reduce the number of hours worked by staff affected by the chip shortage. The state reimburses the company for a portion of the lost hours, allowing workers to receive most of their salary on the condition they are re-trained and not laid off.</p> <p>After a regular monthly meeting with management on Tuesday union representatives said too many staff were being put on the furlough scheme.</p> <p>Anh-Quan Nguyen, a representative of white-collar union <span class="caps">CFE</span>-<span class="caps">CGC</span> union, said his union was concerned that France’s relatively generous furlough terms meant a disproportionate number of workers were being put on partial leave compared with other Stellantis operations outside France.</p> <p>“White collar workers are having to go into partial unemployment even when there is plenty of work to do. It makes no sense,” Anh-Quan Nguyen, told Reuters.</p> <p>Another union, the <span class="caps">CFDT</span>, said the company had failed to offer a sufficiently developed options for training opportunities.</p> <p>Force Ouvriere, another union which agreed the furlough deal, which is the largest union inside Stellantis, said it was on alert for signs the company was furloughing too many workers whose roles were not directly linked to production. </p> <p>A Stellantis spokeswoman, responding to the <span class="caps">CFE</span>-<span class="caps">CGC</span> complaint, said the partial unemployment arrangements were not limited to assembly lines.</p> <p>“The whole company is involved in … the objective of ensuring sustainability in the context of the semiconductor crisis, electrification and compliance with CO2 regulations,” she said.</p> <p>Stellantis said there were no similar furlough schemes in place within the group elsewhere in Europe.</p> <p>Stellantis, created by the merger between <span class="caps">PSA</span> and <span class="caps">FCA</span>, this summer forecast it would produce 1.4 million fewer vehicles this year because of the chip shortage.</p> <p/> <p>(This story corrects to add dropped “in France” to headline)</p> <p>In France, under the furlough scheme workers give up on average one working day a week.</p> <p>Workers and their supervisors receive 84% if their net salary, with the state paying Stellantis an allowance corresponding to 60% of a worker’s gross salary for the furloughed days.</p> <p>Stellantis and the unions agreed the furlough scheme for an initial period of up to six months, though the agreement can be extended for three more years.</p> <p/> </div>