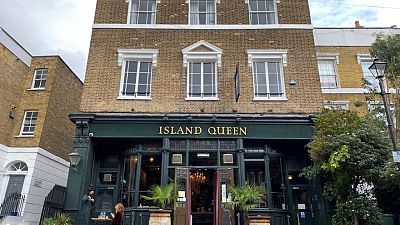 <div> <p>By Muvija M</p> <p> -British pub operators reported a rebound in sales on Thursday, as drinkers returned after months of lockdowns, but flagged a labour crunch that could strain the industry ahead of a busy holiday season.</p> <p>The hospitality sector has suffered from prolonged closures of pubs and hotels over the last 18 months and still faces the risk of renewed restrictions should any spike in infections becomes unmanageable. </p> <p>Since England lifted all restrictions in July, many people have returned to eateries and pubs to dine out with their friends and families, although some remain wary. </p> <p>A bigger challenge could be a shortage of labourers, which has beset the industry since the reopening and could potentially limit earnings during usually bustling Christmas season around the end of the year.</p> <p>Europeans who left during because of the pandemic, or because of Britain’s departure from the European Union, and a “pingdemic” that forced people to isolate after being “pinged” by a government app because they had been in contact with someone who had tested positive for <span class="caps">COVID</span>-19 have contributed to the staff shortfall.</p> <p>“Whilst this is very frustrating, we believe that the end of the furlough scheme in September will increase the pool of labour,” said City Pub Group, which runs 45 pubs.</p> <p>Phil Urban, who heads Britain’s second-largest pub operator Mitchells & Butlers, has said that uncertainty around the pandemic caused some workers to give up on the sector. </p> <p>Mitchells, a more than century old brewer that runs 1,700 pubs and restaurants, said sales over the last eight weeks were above pre-pandemic levels at 104%. </p> <p>Year-to-date sales at the owner of Harvester, Toby Carvery and All Bar One were at 45% of 2019 levels. </p> <p><span class="caps">BACK</span> TO <span class="caps">THE</span> <span class="caps">CITY</span></p> <p>Fuller Smith & Turner, which has a larger exposure to London, said like-for-like sales stood at 86% of 2019 levels in the seven weeks to Sept. 18.</p> <p>The company, popularly known as Fuller’s, said it expects footfall in the city to increase as people continue to return to offices. Eateries in cities have taken longer to recover as companies adapt more to a flexible model, which means more time working from home.</p> <p>Its boss Simon Emeny said the company was not immune to the wider challenges including recruitment, but said its rural pubs and hotels have benefited from more domestic tourism.</p> <p>“We are now beginning to see a return of customers to our Central London pubs, which is a great sign as we head into a busy trading period,” he said.</p> </div>