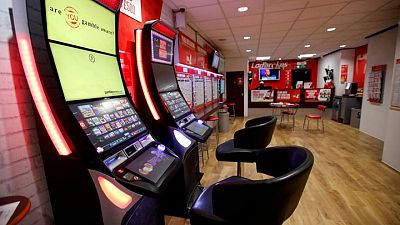 <div> <p>By Muvija M</p> <p> – Entain’s shares hit a record high on Wednesday after the British gambling group received a $22.4 billion takeover proposal from U.S. rival DraftKings, double a bid it rejected from joint venture partner <span class="caps">MGM</span> in January.</p> <p>Dealmaking is picking up in the online gaming industry as the United States opens up to sports betting and players look to build scale and tap the expertise of foreign companies in more developed markets.</p> <p>Shares in Entain, which owns traditional Ladbrokes and Coral betting shops as well as newer online brands such as bwin and partypoker, jumped as much as 11% to hit 25 pounds and top London’s benchmark index.</p> <p>That compared with the 28 pounds cash and stock proposal from DraftKings, a 46.2% premium to Entain’s closing price on Monday, which followed an earlier approach of 25 pounds rejected by Entain.</p> <p>“The board of Entain will carefully consider the proposal,” said Entain, led by new <span class="caps">CEO</span> Jette Nygaard-Andersen. DraftKings has until Oct. 19 to either make a firm bid or walk away.</p> <p>DraftKings’ interest comes weeks after it clinched a $1.6 billion deal to buy U.S. rival Golden Nugget.</p> <p>As for its bet on Entain, analysts said much would depend on the British company’s U.S. joint venture partner, <span class="caps">MGM</span>, which said any deal that would make Entain a competitor in the United States would require its consent.</p> <p>JP Morgan analysts said that to win <span class="caps">MGM</span>’s approval, DraftKings may have to sell Entain’s 50% stake in BetMGM to <span class="caps">MGM</span>, leaving DraftKings with Entain’s rest-of-the-world operations, as well as its technology and expertise.</p> <p>That would mirror the fate of William Hill, another storied British betting brand that U.S. group Caesars bought in a 2.9 billion pound deal earlier this year, only to then sell its non-U.S. operations.</p> <p>Alternatively, DraftKings could seek to merge with BetMGM, giving <span class="caps">MGM</span> a stake in the new company. “However, the deal would have to be attractive for <span class="caps">MGM</span> to give up its desire to have control,” the JP Morgan analysts said.</p> <p><span class="caps">AMERICAN</span> <span class="caps">EXPANSION</span> </p> <p>BetMGM, an online sportsbook for betting on <span class="caps">NFL</span> American football and <span class="caps">NBA</span> basketball games, controls 21% of the market versus DraftKings’ 17%, according to <span class="caps">RBC</span>. Flutter-owned FanDuel is another major player. </p> <p>The joint venture is targetting $1 billion in revenues for 2022, while Entain – which along with <span class="caps">MGM</span> is investing $660 million in the partnership this year – expects it to be in 20 U.S. states over the next 12 months.</p> <p>“Staid UK high street bookmakers are not an obvious fit for a U.S. fantasy sports giant, but it’s Entain’s U.S. sports betting venture with <span class="caps">MGM</span> that’s drawn DraftKings eye” Hargreaves Lansdown analyst Nicholas Hyett said.</p> <p>“Entain not only has the necessary know-how, but also the brand and market position to give it the best chance of success.” </p> <p>London-listed companies have been pioneers in gambling technology, developing apps that allow fans to place “in play” bets while they watch a match live. </p> <p>Entain, whose previous boss Shay Segev left after it snubbed <span class="caps">MGM</span>’s $11 billion approach, has been on its own buying spree too, snapping up European operators Bet.pt and Enlabs AB. </p> <p>The company, which has a database of 160 million players and saw more than 2 million sports bets placed on its platforms a day last year https://entaingroup.com/wp-content/uploads/2021/05/Entain-2020-Annual-Report.pdf, has been investing in technology. </p> <p>For example, it is using behavioural indicators to help identify gamblers at risk of addiction or financial hardship.</p> <p/> </div>