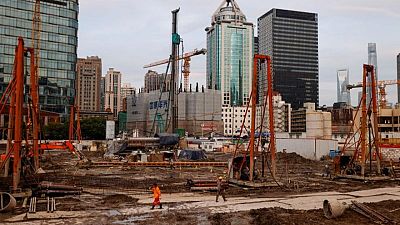 <div> <p>By Anushka Trivedi</p> <p> -Bank of America cut its China growth forecast on Tuesday in response to intensifying troubles at property giant Evergrande, a fresh <span class="caps">COVID</span> outbreak and a widespread regulatory squeeze, going beyond warnings issued by other investment banks.</p> <p>While BofA trimmed its real gross domestic product (<span class="caps">GDP</span>) growth forecast for China for this year to 8.0% from 8.3%, it reserved its biggest cut for 2022 to 5.3% from 6.2%. It also trimmed its 2023 outlook to 5.8% from 6.0%.</p> <p>BofA’s cuts come as economic headwinds have been growing for China’s $14.5 trillion economy and reflect growing concern that Evergrande’s troubles could have a wide impact. </p> <p>Recent weak data including retail sales and factory output also pointed towards a downturn in the country’s economy due to supply chain bottlenecks and <span class="caps">COVID</span>-19, after China posted a stellar recovery from the pandemic last year. </p> <p>Standard Chartered and <span class="caps">ING</span> said last week they considered inadequate policy support as a major downside risk to their <span class="caps">GDP</span> forecasts and called for a 50 basis point cut to the central bank’s reserve requirement ratio in the fourth-quarter.</p> <p>Goldman Sachs cautioned on Monday that further deterioration in the property market would challenge economic policies in 2022 unless China’s growth target was set much lower than 5%-6%.</p> <p>China’s real estate sector, comprising about a quarter of the country’s economy, has been in the spotlight since the risk of debt-saddled Evergrande defaulting increased, with markets tanking on Monday over its repercussions. </p> <p>Evergrande has total liabilities of $305 billion with two bond payments due this week, which it is unlikely to fulfil. Its total liability burden stands at less than 2% of <span class="caps">GDP</span>, signalling Beijing is well placed to prevent a wider economic shock.</p> <p>BofA said its base-case scenario of the ongoing problems at Evergrande is “there would be little spillover” effect on the property sector as a whole and financial markets if the government facilitates an orderly debt restructuring. </p> <p>“Any further delay in policy response from the fourth quarter of 2021 to the first quarter of 2022 or mishandling of a major debtor default would potentially raise the risk of growth dislocation,” analysts at the investment bank said in a note.</p> </div>