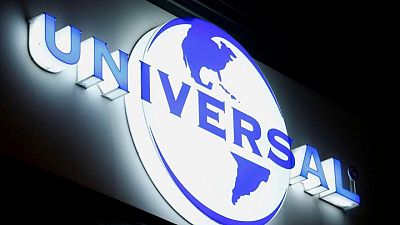 <div> <p>By Matthieu Protard and Gwénaëlle Barzic</p> <p><span class="caps">PARIS</span>/AMSTERDAM -Universal Music Group, the business behind singers such as Lady Gaga, Taylor Swift and The Weeknd, is valued at around 33.5 billion euros ($39.30 billion) ahead of the record label’s stock market debut in Amsterdam on Tuesday.</p> <p>France’s Vivendi is spinning off Universal and on Monday set a reference price for the listing at 18.5 euros per share, according to a statement issued by Euronext. </p> <p>Universal Music Group’s (<span class="caps">UMG</span>) listing will be Europe’s largest this year and will hand 60% of shares to Vivendi shareholders.</p> <p>Universal is betting that a boom in streaming led by Spotify that has fuelled royalty revenue and profit growth for several years still has a long way to run, in a music industry it dominates along with Warner and Sony Music, part of Sony Group Corp.</p> <p>Its flotation carries high stakes for Canal+ owner Vivendi, which hopes to rid itself of a conglomerate discount. However, the listing raises questions about Vivendi’s strategy once it parts ways with its cash cow, in which it will retain only a 10% stake. </p> <p>Several high-profile investors have also already snapped up large Universal stakes, banking in part on the group’s back catalogue, which includes the likes of Bob Dylan and the Beatles. They also hope deals with ad-supported software and social media platforms such as Alphabet Inc’s YouTube and TikTok will sustain its performance and valuation.</p> <p>U.S. billionaire William Ackman suffered a setback when his attempt to invest in Universal via a special purpose acquisition vehicle (<span class="caps">SPAC</span>) hit a snag with regulators and investors. However, Ackman still got a 10% stake via his Pershing Square hedge fund. China’s Tencent owns 20% of Universal.</p> <p>One winner in the listing will be Vincent Bollore, the French media tycoon who is Vivendi’s controlling shareholder. He will receive Universal shares worth 6 billion euros at Monday’s price.</p> <p>Bollore has been an aggressive consolidator in France’s media and publishing landscape, and he has a long-held ambition to build up a southern European media powerhouse.</p> <p>Vivendi itself may suffer in the short run, however, and shares are expected to fall Tuesday as they begin trading without Universal.</p> <p><span class="caps">BNP</span> Paribas, Natixis, Credit Agricole, Morgan Stanley and Societe Generale are the lead financial advisers on the deal, out of 17 banks in total — an unusually large total.</p> <p>The fee pot is expected to be below standard listings as no fresh cash is being raised as part of the spin-off. </p> <p>Universal said in its prospectus that the overall expenses to be paid in relation to the Universal deal would not go beyond 0.5% of the total amount of the share distribution.</p> <p>The listing is the latest win for Euronext in Amsterdam, which has grown as a financial centre in the wake of Britain’s departure from the European Union. Before Universal, Amsterdam had attracted a record 14 <span class="caps">IPO</span>s so far this year, of which 10 were <span class="caps">SPAC</span>s.</p> <p>But the only Amsterdam listing of a size comparable to Universal in recent history was the 95 billion euro listing of technology investor Prosus, also a spin-off, in September 2019.</p> <p>($1 = 0.8524 euros)</p> </div>