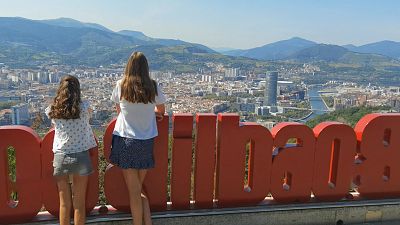 Bilbao and its metropolitan area have undergone a profound transformation in the last 30 years. The city is shaking off its industrial past and reducing pollution.

In addition to pedestrianising the entire old town and numerous downtown streets full of shops, the local authorities opted for the creation of an increasingly sustainable public transport system, which includes trams, subways as well as hybrid and electric urban buses. They've also created a wide network of cycle lanes and rental bikes to easily move around the city.

A year ago, Bilbao became the first city with a population of over 300,000 to lower the speed limit from 50 to 30 km an hour in all urban areas.

Deputy Mayor and Councilor for Mobility and Sustainability, Alfonso Gil, is happy with the results of all these changes. "We have better air quality, so there's less pollution, less fumes and lower noise levels. We have lowered the city's sound levels by two to three decibels and there are also less accidents", he explains.

These measures were combined with a big public awareness campaign and earned Bilbao the Urban Road Safety Award, an honour bestowed on the city by the European Commission during the European Mobility Week.

Alfonso Gil
Deputy Mayor and Councilor for Mobility and Sustainability

The measures affect the entire population but especially certain sectors, like taxi drivers. Eduard a taxi driver in the city told euronews that the newly imposed speed restrictions slow down their work and mean they have to work more hours.

Some critics are protesting at having to drive at 30 km/h on some of the urban two way roads there that have no residential areas around. However, no changes are expected to the limits and rules are expected.

Several radars have already been installed in the city to fine those driving too fast, and 29 more are expected to be set up. Local authorities are committed to making people change.

Bilbao was one of the cities awarded by the European Commission. Grenoble, Lilienthal, and Mönchengladbach were also on the list.