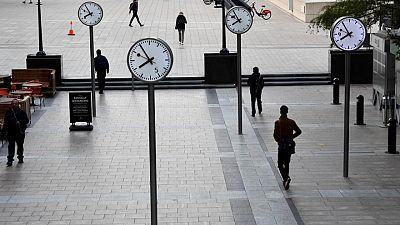 British employers are facing the most severe shortage of job candidates on record due to the post-lockdown surge in the economy and Brexit, pushing up starting pay for permanent staff at an unprecedented pace, a recruiters' body said.

In a survey which will be studied by the Bank of England as it weighs up the risk of a longer-term inflation problem, the Recruitment and Employment Confederation (REC) said employers were increasingly upbeat about the outlook in August.

But their attempts to hire staff were being frustrated by shortages of staff. BoE Governor Andrew Bailey said on Wednesday he was concerned about getting jobs filled.

REC said a reluctance by employees to switch roles due to the pandemic, fewer European Union workers and skill shortages were contributing to the staffing squeeze.

"Candidate shortages continue to plague businesses, who are all recruiting from the same pool of talent and struggling to fill gaps," said Claire Warnes, head of education, skills and productivity at KPMG UK, which co-produces the survey.

The pace of recruitment for permanent posts hit the highest in the survey's nearly 24-year history last month. Temporary hiring and open vacancies were not far off July's record levels.

Salaries for newly placed permanent staff rose at the fastest rate on record. Wage inflation for temp workers was the second-quickest.

Warnes said the expiry of the government's furlough scheme at the end of this month did not mean the staffing "crisis" was going to go away as more people become available for work.

"Many businesses will have changed their business model during the pandemic, and so significant numbers of staff returning from furlough may need re-skilling to rejoin the workforce in the same or another sector," she said.

Investment by businesses was likely to fall this year as the hit to firms' finances from the pandemic, bigger tax bills and concerns over future COVID restrictions outweigh the boost from a tax incentive announced by finance minister Rishi Sunak.

The BCC said business investment would be 5.4 per cent lower than its pre-pandemic level at the end of 2023 while consumer spending is projected to be 5.1 per cent higher.

"It is concerning that business investment  looks like being  the weak point of the recovery because it undermines the UK's ability to raise productivity and increase our long-term growth prospects," Suren  Thiru, the BCC's head of economics, said.

Would you accept being paid less to work remotely?