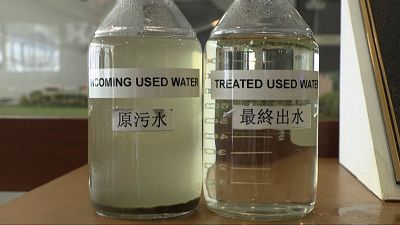 While most of the wastewater is used for industrial purposes, some of it is added to drinking water supplies.   -   Copyright  AFP
By Julie Gaubert  with AFP  •  Updated: 13/08/2021

At a time when global warming threatens our water resources, Singapore recycles 40 per cent of its wastewater and wants to push this percentage even further.

The Southeast Asian island nation has very limited resources and has long had to rely principally on water supplies from neighbouring Malaysia.

In a push for more self-sufficiency, the Singaporean government has decided to tackle the issue with an advanced system for treating sewage, involving a network of tunnels, high-tech plants, and air ventilators.

Collect every drop and reuse it endlessly

"Singapore lacks natural resources and it is limited in space, which is why we are always looking for ways to explore water sources and stretch our water supply," Low Pei Chin, chief engineer of the Public Utilities Board's water reclamation department, told AFP.

"Our water management strategy consists of three parts: first is to collect every drop of water, two, reuse endlessly, and thirdly is to turn seawater into drinking water, which is desalination," she added.

This recycling system strategy is operating at the high-tech Changi Water Reclamation Plant on the city's eastern coast.

An architectural maze of pipes, tanks, and filtration systems with the capacity to treat 900 million litres of used water a day - enough to fill an Olympic-sized swimming pool every 24 hours for a year.

One of the particularities of such a building is that its whole activity is more below the Earth’s surface than above, as it is fed by wastewater that flows through a massive, 48-kilometre tunnel, linked to sewers.

There, the treated water is further cleansed, with impurities like bacteria and viruses removed through advanced filtration processes, and disinfected with ultraviolet rays.

By 2060, the company is expected to meet up to 55 per cent of Singapore’s future water demand.

While most of the wastewater is used for industrial purposes, some of it is added to drinking water supplies in reservoirs in the city-state, which is home to 5.7 million people.

The system can also help reduce maritime pollution since only a small amount of the treated water is discharged into the sea.

A virtuous circle marking a contrast to most other countries - 80 per cent of the world's wastewater flows back into the ecosystem without being treated or reused, according to UN estimates.

This largely contributes to a situation where “1.8 billion people use a source of drinking water contaminated with faeces, putting them at risk of contracting cholera, dysentery, typhoid, and polio”.

What’s next for NEWater?

The plant will see an extra underground tunnel added to its current premises in order to serve the western half of the island, which should be completed by 2025.

The total cost of upgrading its water treatment infrastructure operation will hit Sg$10 billion (€6.3 billion) by the time the expansion is finished.