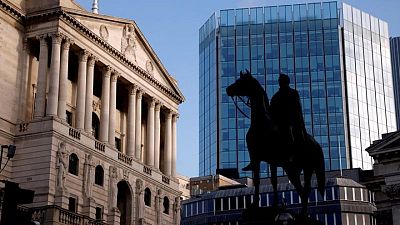 LONDON (Reuters) -Top British officials worried that bond markets could turn against them in early 2020 due to the sums being borrowed to finance the pandemic response, Prime Minister Boris Johnson’s former top adviser Dominic Cummings said.

Britain, along with other countries including the United States, saw major volatility in its bond market in March 2020 as panicked investors sought the most liquid possible assets.

“What if the bond markets suddenly spike and go crazy and refused to lend to us? We’re going then to have to find emergency powers to tell the Bank of England to buy the debt, etc, etc.”

On March 19, 2020, after an emergency meeting, the BoE cut interest rates to a record low and said it would buy 190 billion pounds of government bonds from investors as part of efforts to support the economy.

The BoE said its action was in line with its public remit to stop inflation plunging far below its 2% target as the economy suffered its biggest slump in over 300 years, and to bring stability back to financial markets.

The BoE blamed the market volatility on funds whose investors wanted to withdraw cash at short notice, and said its policy was not influenced by government borrowing needs.

In April 2020 the BoE agreed it would provide short-term finance to the government – repayable by the end of the year – if the government was temporarily unable to raise money from bond markets due to any future market dysfunction.

The government did not actually need to use the facility, unlike in the 2008 financial crisis when it temporarily borrowed almost 20 billion pounds from the BoE.