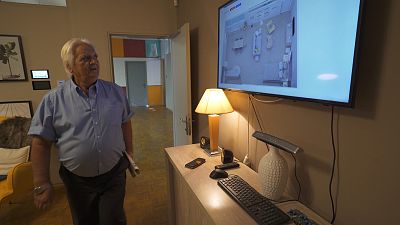 Artificial Intelligence has been a game-changer in all spheres of technology, especially since the turn of the century. Researchers based in the western Greek city of Patras are now taking its potential into our dwellings, to revolutionise our homes - and make them smart.

With more people living for longer across Europe, a further strain has been put on health and social care systems. The idea of assisted living has become an important notion in the technological world, in terms of helping to deal with this issue.

The University of Peloponnese is assembling prototype living spaces to research how they may look and work in the near future for the elderly, for people with disabilities and for those living with chronic conditions. The aim is to allow these groups to live independently, safely and conveniently for longer.

One of the devices the researchers are trialling is a smart mirror. Using facial recognition technology, it can detect the early signs of potential ill health.

Assistant Professor Christos Antonopoulos at the University of Peloponnese says the mirror's potential is huge:

“The mirror measures basic but critical biometric modalities, like heart rate, like blood pressure, it can monitor the eye's pupil and (even) indicate potential future problems with the liver and many more (functions).

"And all this information is directly sent either to the doctor or family members.”

In an important sense, hospital services are being brought into the home. Wearing a sensor, Kostas Koutsopoulos, a triallist at the university, can demonstrate rehabilitation exercises in front of the mirror.

The data about his performance is collected and his doctor is then informed of his condition.

Assistant Professor Antonopoulos says these technological advances may be crucial in the future:

“The typical hospital infrastructure is reaching its limit, their capacity. In the future, it’s going to be worse.

The technology will also allow the resident to close doors and dim lights with voice commands.

Additionally, sensors can monitor the resident’s movements, even spotting early signs of conditions like dementia, if telltale regular behaviours change.

69-year-old Kostas Koutsopoulos has been working with the researchers to test their work's potential.

“I would be happy to have this technology at home, because it would ensure my safety. It would be like having a doctor in the house.”

The smart home is run on a Cloud system, using AI.

But isn’t this crossing over into our perennial fear of Big Brother-style surveillance?

“We’re (monitoring) events, that something has happened.

"So, for example in the case of a fall, we know that the fall has taken place. That’s it. No data, no images, no pictures, no video of the person that has fallen.”

With 5G on the horizon in Europe, Angeliki Dedopoulou, EU Policy Expert for AI, Huawei is confident that increased connectivity will help take smart home technology to the next level:

“Huawei has been in Europe for 20 years, working closely with universities and other partners to deploy and enable technologies like AI – in combination with 5G – in order to facilitate the healthcare sector, which is very much related to the smart home - and boost competitiveness and growth in Europe.”

How to cope with growing and ageing populations is a challenge not just for Europe, but around the world.

The smart home concept being developed in Patras might just help provide a cure.