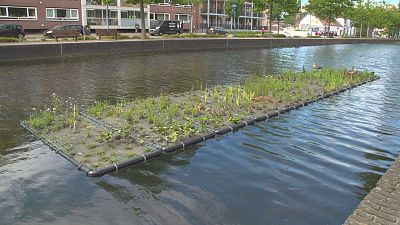 Many of our European cities have become more and more crowded, with lots of green spaces replaced by concrete.

This tendency has had major repercussions in terms of climate change: floods, rising temperatures in city centres and air pollution are among the main consequences of this over-urbanisation of our living spaces.

However, nature can inspire modern solutions to protect the environment.

A growing number of European cities are turning to what are being termed Nature Based Solutions to improve urban climate and water resilience. Eindhoven, along with Tampere in Finland and Genoa in Italy is at the forefront of cities that are trying new strategies within the European UNaLab project.

The Nature Based Solutions range of plans offers different options for each urban issue. In Eindhoven, a southern Dutch city of 230,000 inhabitants, the focus is on local climate modifications and water management.

Rik Thijs, Councillor for Climate, Energy and Public Spaces with Eindhoven Council, is only too aware of the problems:

"Eindhoven city centre is very stony. So the heat stress is a very big problem. Last year, Eindhoven recorded the hottest temperature in the Netherlands, 41 °C. But on rainy days, our streets are getting flooded. And that's also a very, very big problem."

Paved roads have a tendency to quickly increase the heat of the surrounding environment - and they also retain water more readily. To cope with these problems, the strategy is to increase the amount of green areas, including bodies of water. This approach makes it even easier - and less costly - to maintain these public areas.

Another key challenge is preventing the formation of urban heat islands within the cities. Buildings and roads capture solar radiation, often creating uncomfortably warm conditions for its inhabitants and also stressing local ecosystems. Deaths due to heatwaves in the Netherlands have recently increaseed by 12%.

The authorities in Eindhoven have recently applied these concepts at a square in the city centre, where trees and grass have been planted on what was previously a stone-covered area.

"The square was totally paved before and all the greenery that's been put into this square is meant to stimulate the biodiversity, to stimulate a more liveable situation for the citizens - and to use the rainwater in a more innovative and a smarter way"

Other projects have included gardens with water storage systems to collect rain, which can then be used for watering plants and grass. Green areas have multiple advantages, not least the creation of a pleasant and healthier environment for the local residents.

Theo Hoppenbrouwers, from the Council's Neighbourhoods Committee, says it's a way of dealing with a changing climate:

"The stress of the heat in the summertime is too much and we are not used to that in Holland. So the environment is not that nice to live in, in summertime. And if you can change that with flowers and the trees, then that will help to cool it down".

Milan Koelen is a local resident and film maker who says the centre of the city has altered for the better:

"The park has changed completely. It's a 180 degree change from before: there were concrete benches, no nature and now it's beautiful. I think it's really important for nature to find its place back in the cities. We've been neglecting it for too long"

The concept of this project looks at urban habitats as living organisms, and green spaces deliver healthy improvements to air quality; paved areas entrap only a small volume of particles and pollutants, whereas green areas capture them from the air and retain them to a much higher degree. This is an important consideration in the Netherlands, where pollution from particulate matter actually causes more deaths than road accidents.

How a small French town became a key transport hub

Scientists come up with innovative ways to educate on past traditions