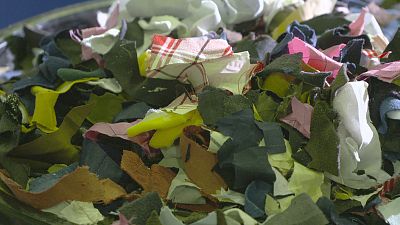 Each year the European Union produces some 8 million tonnes of textile waste.

It’s made up primarily of used clothes, but there is also bedding, carpets, curtains, upholstery and a myriad of other things.

At the moment, only about 20 per cent of that is recycled. The rest ends up in landfill or is simply incinerated.

Now researchers in the Slovenian city of Maribor are hoping to change all that.

They have designed and built a pilot plant to turn used clothes into materials such as glucose, glycol or acids that can be used in the biochemical industry.

Mojca Poberznik is an environmental engineer at the Institute for Environmental Protection and Sensors in Maribor.

She says one of the reasons most textiles end up being destroyed is that they are often treated with dyes and chemicals, making recycling particularly challenging. Metal and plastic are also frequently present.

Once sorted, textiles such as wool, cotton or polyester go through customised processes including the removal of any dyes.

"It is really very important that the waste we use as input, as raw material, is sorted very well,” Poberznik told Euronews.

Out of polyester, for example, researchers were able to create acids that can be used later to produce plastics. But there are also other compounds.

Aleksandra Lobnik, professor of environmental engineering at the University of Maribor, said: "We treat cotton for instance. From it, we got glucose juice that was transferred into bioethanol. Then we treat wool. From wool, we got proteins that can be used as resins, instead of toxic formaldehyde resins (actually used) in wood panels.”

Researchers think the same technology could be used to encourage the circular economy models of other waste products.

Scientists say they hope their work will also increase public awareness about the environmental and economic importance of properly sorting and recycling textile waste.