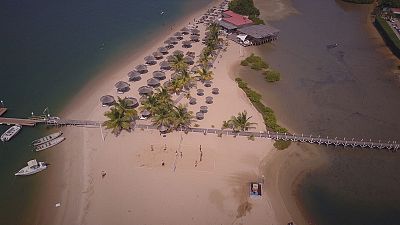 A country of outstanding natural beauty

Whereas oil leaves the country, revenue from tourism doesn't. Money spent here stays here and can be reinvested, so resources linked to tourism stay in Angola and help develop the economy.

Welcome to this new edition of our series on Angola.

1.600 kilometres of scenic coastline, breathtaking landscapes, a rich and varied fauna and flora, and an exceptional cultural heritage: Angola’s potential for tourism is enormous but remains largely untapped.

Some investors have already fallen under its charms and say that when it comes to sites of outstanding natural beauty Angola is right up there with its neighbours, South Africa, Botswana or Namibia, where tourism is much more developed.

So can Angola diversify its economic growth by boosting its tourism industry?

Investors at the Pululukwa resort in the southern Huíla province have taken a bet and injected 35 millions dollars into a luxury eco-lodge. Located in the midst of a 210-hectare site, it boasts cosy bungalows, high-end cuisine and even has its own animal sanctuary.

“All the material we use here has a connection with nature: we use wood, straw and even stone,” explains Pedro Sérgio Fernandes, the resort’s general director. “We have tried to create a place where people really feel they are in Africa – but we also want to offer a high-end eco-tourism experience.”

It seems to be working: the resort has become a reference for tourism in Angola. Further investment is scheduled in the coming months, a chance for the Lubango area to diversify its economic activity, which is historically based on agriculture. The lodge employs 120 people.

“99% of the people who work here are Angolan – that’s huge! It means it can be done and it’s important to get that message through,” says Pedro Sérgio Fernandes.

Unlike oil, revenue from tourism stays in the country

“Whereas oil leaves the country, revenue from tourism doesn’t. Money spent here stays here and can be reinvested, so resources linked to tourism stay in Angola and help develop the economy,” she tells us.

Fifteen years after the end of the civil war, Angola’s image abroad is changing. A lot of thought is going into developing a strategy to boost tourism, by making it easier for visitors to obtain visas, for example.

“What we need to do now is to work on our image as a unique tourist destination. We need to identify which sector we want to focus on first. It needs to be done step by step, we can’t do it all at once,” says Amélia Carlos Cazalma.

And the work has already started. Angola’s national airline company is developing a new strategy. The goal is, of course, to promote Luanda as a tourism destination. But it goes further: thanks to a partnership with the airline giant Emirates, Taag wants to turn Luanda into an international hub.

“Everybody knows that Dubai is a major hub, so we will benefit from Emirates’ experience in that field,” says Taag’s executive administraor, Joaquim Cunha.

The goal is not only to welcome more tourists but also to turn Luanda into a transit hub for destinations like Lisbon, Johannesburg or Havana.

“Today, between 80 and 100 people transit through Luanda every day, and we are convinced we can boost that figure by promoting our services in markets where we have a foothold,” says Joaquim Cunha.

A new strategy which has allowed the airline company to balance its losses in 2016 and recover financial stability – providing a sound basis to boost tourism in Angola.