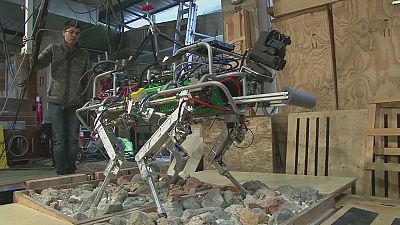 <p>As Italy is slowly recovering from a series of deadly earthquakes, researchers at the Italian Institute of Technology of Genoa are developing a new generation of robots to work in disaster zones.</p> <p>The key to the four-legged robot, called HyQ, an acronym for “Hydraulic Quadruped”, is its mobility. It can trot, walk on rocks, climb stairs, walk backwards and keep itself upright if it gets knocked.</p> <p>“We expect that the future version of this robot can work alongside rescue workers in about five years and it can carry different kinds of sensors, like laser sensors, cameras, or contamination meters, gas sensors, to provide remote information to the rescue workers so that they can plan better their missions,” explained Claudio Semini, Project Manager, <br /> Italian Institute of Technology.</p> <p>During a risky operation, the robot could be used to transport materials or reach areas inaccessible to rescue workers. Researchers say the robot’s shape was inspired by four-legged animals. </p> <blockquote class="twitter-tweet" data-lang="en"><p lang="en" dir="ltr">HyQ's four-legged robot is fitted with a swinging arm that removes large obstacles <a href="https://t.co/0OB7NJHUvv">https://t.co/0OB7NJHUvv</a> <a href="https://t.co/Rivqd7XvpT">pic.twitter.com/Rivqd7XvpT</a></p>— Grandjee (@grandjee2015) <a href="https://twitter.com/grandjee2015/status/688374711739224065">January 16, 2016</a></blockquote> <script async src="//platform.twitter.com/widgets.js" charset="utf-8"></script> <p>“This type of robot is particularly versatile, especially in the case of a building or structure which has collapsed, because by relying on four sources of support – its legs – it has greater stability and the ability to walk,” pointed out Luca Ciarleglio, Disaster Manager, Civil Protection of Florence.</p> <p>It is still a work in progress and needs improvement in different areas before it can be deployed in the field.</p> <p>“Motion is obviously important, as well as the robot’s autonomy, especially if we want to use it in an emergency,” stressed Luca Ciarleglio.</p> <p>The machine will be tested with Civil Protection and Fire Department emergency workers. Their feedback will be crucial for its future use.</p> <p>HyQ is not the only quadruped robot research centres in the United States and Japan have developed robots serving similar purposes.</p>