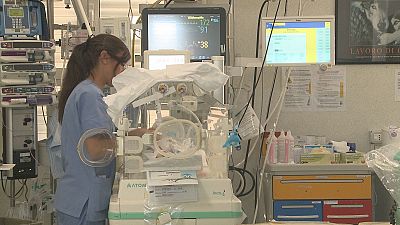 <p>At the neonatal intensive care unit of Milan’s Mangiagalli hospital, the patients are very vulnerable ones: premature babies. The hospital is testing a new tool aiming to improve their medical monitoring and reduce the risk of brain injury.</p> <p>The organs of premature babies are not fully ready for life outside the womb, and there is a high risk of complications – brain injury, developmental problems and handicap – especially for those born before seven months. These are known as extremely preterm; more than 25,000 of them are born each year in Europe.</p> <p>According to a <a href="http://www.who.int/pmnch/media/news/2012/201204_borntoosoon-report.pdf">World Health Organization report</a> on the topic, about 1.1 million babies die from preterm birth complications.</p> <p>“When a baby is extremely preterm, the risk of dying or getting significant brain injury and handicap is 25 percent,” explains Gorm Greisen, Professor of Paediatrics at Copenhagen University Hospital. “We, as neonatologists are good at dealing with the respiratory problems… but we have until now not (had) so many means of protecting the brain. So we need instruments to help us measure the oxygen sufficiency of the brain, the blood supply to the brain.”</p> <p>A <a href="http://www.babylux-project.eu/">European research project</a> is developing a prototype for such an instrument, using optical technology. It’s being tested in two hospitals, in Milan but also in Copenhagen, and for the time being only on babies born at full term.</p> <p>“This highly sophisticated technology actually consists of a light that comes out of these emitters,” explains Monica Fumagalli, a neonatal specialist at the Mangiagalli hospital. “The probe is simply placed on the newborn’s head. We cover up the eyes, but the instrument is programmed to be absolutely safe for the newborn.”</p> <p>Using red and infrared lights that allow scientists to see through body tissue, the optical instrument provides real-time and highly accurate measures of the flow of blood and oxygen to the brain. And <a href="https://ec.europa.eu/digital-single-market/blog/babylux-develops-innovative-technique-monitor-oxygen-brain-premature-babies">it’s a non-invasive technique</a>, which doctors say is very important.</p> <p>“Entering a neonatal intensive unit is extremely stressful for parents. The goal for us is to find a balance between technology that can change the diagnosis for these babies, without disturbing them (the newborns),” says Fumagalli.</p> <p>Nine universities and institutes across Europe collaborated to develop this prototype. The project coordinator works in the physics department of the Polytechnic University of Milan.</p> <p>“This technique complements magnetic resonance imaging (<span class="caps">MRI</span>). It provides the same information but with a much more compact technology, that is cheaper and that you can bring right next to the baby’s cot, or the patient’s bed,” says Alessandro Torricelli, physicist at the Polytechnic University of Milan.</p> <p>“The hope for this project is to pave the way to have this instrument on the market in three to five years, to provide neonatologists and hospitals in Europe – and around the world – with a tool to closely monitor the health of premature babies.”</p> <p>The results of the clinical tests are expected in the next few months. Researchers, doctors and parents all want the project to succeed – to give premature babies the best chances for a healthy life.</p> <p><em>Babylux project is led by Politecnico di Milano, Fondazione Politecnico di Milano, <span class="caps">ICFO</span>- Institute of Photonic Sciences, Fraunhofer Institute for Production Technology <span class="caps">IPT</span>, Hemophotonics SL, PicoQuant GmbH, Loop, Capital Region of Denmark and Fondazione <span class="caps">IRCCS</span> Ca’ Granda Ospedale Maggiore Policlinico</em></p>