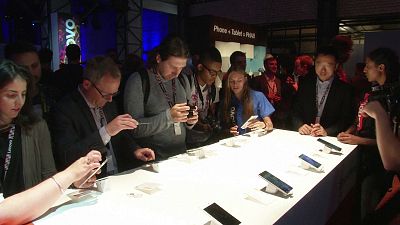 <p>Berlin hosts the <span class="caps">IFA</span>, the biggest consumer electronics fair in Europe. </p> <p>As many as 240,000 visitors are expected to descend on the Berlin ExpoCenter City to take a peek at the high tech wares of 1,600 exhibitors.</p> <blockquote class="twitter-tweet"tw-align-center data-lang="en"><p lang="en" dir="ltr">We're In Berlin For <span class="caps">IFA</span> 2016 <a href="https://t.co/LavATfmn7z">https://t.co/LavATfmn7z</a> <a href="https://t.co/JvezxIxXsM">pic.twitter.com/JvezxIxXsM</a></p>— Into Tomorrow (@itRadioShow) <a href="https://twitter.com/itRadioShow/status/770559506036068353">August 30, 2016</a></blockquote> <script async src="//platform.twitter.com/widgets.js" charset="utf-8"></script> <p>Smartphones are big on the menu with Huawei and Sony expected to launch their latest models, though major innovations are expected to be thin on the ground. </p> <p>Amir Tamannai is the editor of the tech news website Giga Android:“I think at the moment we have reached some peak of innovation because there is nothing left that you could do which is really new. I mean, you can make the smartphones more powerful, which nobody really needs because even looking at a scenario where you need all this hardware power, games, every game now runs on almost every smartphone. VR is another thing, maybe we need some more power for VR, but that is also something that can be easily done. Displays yes, they can get bigger, they can get more resolution. But then again, there is a biological peak where it doesn’t give anymore advantages if you have an even higher resolution.”</p> <p>Over the last few years consumers have moved away from the established players such as Apple and Samsung to a more mid-range smartblower provided by the likes of Huawei and <span class="caps">ZTE</span>.</p> <p>Amir Tamannai continues:<br /> “On the one hand you could just simply say the market is saturated, everybody has a smartphone now and they’re settling with their smartphone, or their idea of what a smartphone should be. So they’re not really looking for any new innovations or any new products. On the other side, the manufacturers, they don’t really know what to do very innovative with their new products. And, also a good thing for consumers but a bad thing for innovation, mid-range and low budget smartphones have become so versatile, so quality-wise good, that there is no need for the real high-end devices anymore.”</p> <p>That may be the case, but the smartphone is becoming more and more integral to our daily lives.</p> <p>The device now acts as a control hub for cars, fridges, lamps and thermostats.</p> <p>This is where innovation in the future lies, claims Shu On Kwok, editor of Androidpit technology news website:<br /> “The smartphone is the brain for other stuff. You can control drones, you can watch VR movies on there, or VR games and stuff like that. All the ecosystem around the smartphones are getting more and more important. All the connected devices, like smartwatches. OK, they haven’t taken off yet. But there are small, small steps going to be connected to the smartphone and they are getting bigger and bigger.”</p> <blockquote class="twitter-tweet"tw-align-center data-lang="en"><p lang="en" dir="ltr">Catch <span class="caps">AMD</span>'s Mark Papermaster & <a href="https://twitter.com/Roy_techhwood"><code>Roy_techhwood</a> <a href="https://twitter.com/IFA_Berlin"></code>IFA_Berlin</a> keynote “Race to Reality“: <a href="https://t.co/aLVEb1vkOY">https://t.co/aLVEb1vkOY</a> <a href="https://twitter.com/hashtag/IFA16?src=hash">#IFA16</a> <a href="https://t.co/hLxU3OzmNh">pic.twitter.com/hLxU3OzmNh</a></p>— <span class="caps">AMD</span> UK (@AMD_UK) <a href="https://twitter.com/AMD_UK/status/770591961078231040">August 30, 2016</a></blockquote> <script async src="//platform.twitter.com/widgets.js" charset="utf-8"></script> <p>Steps are being taken to improve on existing smartphones, but the quantum leap from mobile to smart has already been made. </p> <p>Amir Tamannai is the editor of the tech news website Giga Android:<br /> “I think the optimisations we can expect in the next years, and we hope for, are more like more battery life, and probably better cameras and better fingerprint sensors and the more efficient use of a fingerprint sensor. In any way, the more efficient use of the hardware and of the possibilities of a smartphone.”</p> <p>The trade fair opens to the public on September 2 and runs through September 7.</p>