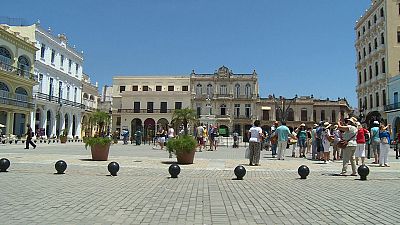 <p>If you’re looking for a holiday in the sun – mixed with a unique history and culture, then you might consider going to Cuba.</p> <p>The Caribbean’s largest island is en vogue with tourists – some 3.5 million foreigners visited the country in 2015 and even more are this year.</p> <p>Daniel Castellanos is a taxi driver in Havana and has met many tourists in his 20 years on the streets of the Cuban capital in his stylish Buick from 1959. </p> <p>“The tourists tell me that they like Cuba a lot because of our family-based spirit, because of our happiness and helpfulness, and because it is a safe country,” he said. </p> <p>Visitors from Canada make up the largest amount of tourists each year, now after Air China launched flights into Cuba last December, the country hopes to attract more tourists from the Far East. </p> <p>Manuel Marrero Cruz is Cuba’s Tourism Minister: “Chinese tourism keeps on growing every year. And the fact that we have Air China flights now will help in this way. What we still need to do though is to consolidate the commercialization.” </p> <p><a href="http://www.fitcuba.com/en/fit-cuba/presentacion/"><span class="caps">FIT</span> Cuba</a> is the main tourism event in Cuba and it takes place in a relaxed sometimes even party-like atmosphere – at the site of the historic Morro Castle overlooking Havana. </p> <p>Special attention was placed on culture and lifestyle. Salsa, joy for life and even colorful fashion shows were only a few of the things being celebrated.</p> <p>Antoine Elzière and Pierre Boudot-Lamotte were two of the French experts on Cuba present at <span class="caps">FIT</span>. They have launched their own magazine, Destination Cuba, dedicated to the diverse pleasures the island has to offer.</p> <p>“When you’re in Cuba you feel like you’re in a film, it’s like being on a set. Cuba is absolutely magnificent in regard to its architecture, which is splendid. The Cubans are great and very warm people. There is music everywhere. And, there’s an absolutely fantastic sea,” said Antoine Elzière, co-founder of Destination Cuba.</p> <p>Cuba is of course not only Salsa and Che Guevara, the majority of tourists come here for its pristine, typically Caribbean beaches. </p> <p>More and more European charter companies fly to resort towns such as Varadero, where new hotels like are being built to cope with the influx.</p> <p>Ana Riscalli, General Manager of Iberostar Varadero says every month they welcome between 20,000 and 23,000 tourists.</p> <p>With 126 hotel investment projects on the way throughout the country, Cuba wants to heavily boost the industry. Some fear that this could put its authenticity at risk.</p> <p>“The question one has to ask today is, is the current enthusiasm about Cuba the result of concerns about its development as it opens up to its big American neighbour, and whether that risks changing its essential qualities and values a little bit,” explained Pierre Boudot-Lamotte, co-founder of Destination Cuba.</p> <p>While US Americans still can only travel in groups for cultural aims for example to Cuba, some 110 commercial flights to the island from the US will be introduced later this year – a result of the rapprochement between Washington and La Habana. </p> <p>Taxi driver Daniel Castellanos believes this will soon change: “US citizens will be allowed to come here, to get to know Cuba and all that. We think that in the coming years, if not in the next few months, the doors for US tourists will be more open than now.” </p> <p>There are increasing signs of a new era in Cuba. Recently Chanel hosted its first fashion show in Latin America in Havana during <span class="caps">FIT</span> Cuba, and US reality TV star family the Kardashian’s holidayed in the city. Those who want to see Cuba the way it once was might have to get in now, before the island draws even bigger crowds.</p>