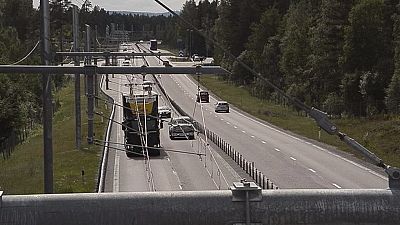 <p>The first so-called <a href="http://www.gizmag.com/sweden-electric-highway/44028/">‘eHighway’ in the world is being tested in Sweden</a> in a bid to lower greenhouse gas emissions from the transport sector, according to its developers. </p> <p>The project was initiated by Sweden’s transport authority and is the result of technological cooperation between engineering company Siemens and truck manufacturer Scania. </p> <p>On Sweden’s E16 road near the town of Sandviken, north of Stockholm, what is claimed to be a world first is about to take place – the testing of an innovative new ‘eHighway’.</p> <p>The idea is relatively simple; trucks connect to overhead cables in a similar way to trams or trains, their engines then switched from diesel to electric. <a href="http://www.techtimes.com/articles/166948/20160625/sweden-launches-first-electric-highway-system-another-one-in-california-soon.htm">Purpose-built hybrid trucks seamlessly connect to the grid</a> through a pantograph on the roof, then run on an electric motor.</p> <p>“I wouldn’t really call it a ground-breaking innovation, because basically it’s the combination of some old and mature technologies,” said Hasso Georg Grunjes, Head of E-Highway at Siemens.</p> <p>“It’s railway technology, combined with truck technology. On the one hand side you have the efficiency of a railway system and you combine it with the flexibility of a truck system, and that’s the real advantage.”</p> <p>For now, the cable system covers a two-kilometre stretch of the E16 highway. The core of the system is an <a href="https://en.wikipedia.org/wiki/Pantograph">intelligent pantograph</a> https://en.wikipedia.org/wiki/Pantograph combined with a hybrid drive system.</p> <p>A sensor system enables the pantograph to hook up to the cable system and disconnect automatically at speeds of up to 90 kilometres per hour.</p> <p>It is claimed to be both cheaper and cleaner than regular diesel engines. Trucks equipped with the system draw power from the overhead wires as they drive, enabling them to travel efficiently and with zero local emissions.</p> <p>On <a href="http://www.forbes.com/sites/federicoguerrini/2016/06/25/electric-highways-for-trucks-are-being-tested-in-sweden-california-to-follow-soon/#255c0c4561fa">roads without any electric infrastructure</a>, the vehicles make use of their diesel hybrid system.</p> <p>“It is automatic on these wires, so you drive the truck perfectly as a normal truck, you don’t do anything,” said Nils-Gunnar Vagstedt, Senior Manager for Electric and Hybrid Powertrain Technololgies, Scania. </p> <p>“You drive it along the white strips on the road, that’s the only guidance you need today, and the electric pantograph does the rest. So if you stay in your lane, you are perfectly all right to pick up the electricity. If you have an obstacle on the road, like you need to overtake or something like that, you just go out in the left lane, and the system fully automatically closes down, and either you go on batteries for the short distance, or you start up a combustion engine. So it’s completely automatic.”</p> <p>For the next two years, experts plan to run trials and gather data to measure the impact it has and determine whether it could be expanded across the whole country.</p> <p>Developers say potential applications include heavily-used routes and in the mine transportation sector, where vehicles often travel the same routes between pits, mines, warehouses and processing plants.</p>