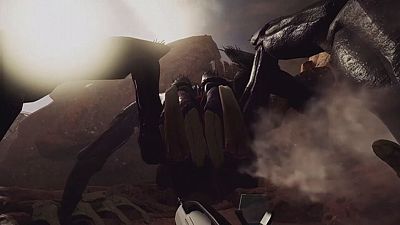 <p>Virtual Reality (VR) was virtually everywhere at the recent <a href="http://www.e3expo.com/takeover">Electronic Entertainment Expo</a>, or E3, in Los Angeles, with double the number of exhibitors from last year.</p> <p>Game makers are taking on new dimensions in a budding market that is still to be explored, and companies, such as Sony, Oculus and <span class="caps">HTC</span>, are introducing new VR headsets.</p> <p>Nevertheless, it is a technology that many are not in tune with. According to a survey by research firm Horizon Media, two-thirds of the U.S. population remains unaware of the technology.</p> <p>Jason Rubin, head of content, <a href="https://www.oculus.com/en-us/">Oculus</a>: “I like to think of this as we’re in the black and white, maybe even no-sound era of movies, where it’s amazing stuff. Anyone that was back there that saw their first movie couldn’t believe what they were seeing, it was almost like fantasy. </p> <p>VR is mind-blowing, but we’re starting on a very long journey to get towards the true space that we are today with blockbuster film and VR. And it’s exciting for developers, also exciting for consumers.”</p> <p><a href="https://www.playstation.com">Sony PlayStation</a> transported gamers to another planet. The console maker has teamed up with San Francisco-based developer <a href="http://www.impulsegear.com/about/">Impulse Gear</a> to create ‘Farpoint’, a space adventure set in a hostile alien land.</p> <p>Seth Luisi, founder, Impulse Gear: “We transport you to an alien world, you get stranded on this world and you need to move around the world, explore it and with VR (Virtual Reality) we really allow you to feel like you’re really there. So we have 3D audio, you hear all the ambiance around you, the wind howling by, any alien creatures scurrying up behind you and jumping from the side, so it is a fully immersive experience.”</p> <p>Game makers are utilising the VR experience to craft thrilling titles, designed to impact the user like never before.</p> <p>Franco-Californian game collective Honor Code Inc.demonstrates this in <a href="http://www.narcosis-the-game.com">Narcosis</a>, a story set in the depths of the Pacific Ocean.</p> <p>David Chen, business developer, Honor Code Inc: “One of the most interesting things is the premise that you’re trapped in this high-tech industrial diving suit – it especially works really well with VR because you put the headset on and you’re totally ensconced in this very tight space and so that really works, it’s very immediate, and people can make the connection really quickly.”</p> <p>By some estimates, the VR market will be worth $150 billion within four years, and will not only shape the future of gaming, but also healthcare, manufacturing and education and training.</p> <p><em>E3 Expo, Twitter: @RichatESA</em></p>