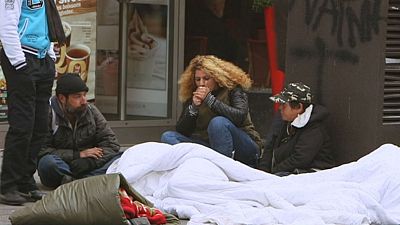 In Real Economy this week Maithreyi Seetharaman looks at the challenges governments face in tackling poverty with the help of some of those closest to the issue.

The shocking truth is that according to Eurostat, the official EU statistics agency, around a quarter of Europe’s population are now at risk of falling into poverty. That adds up 122 million people in the Europe we think of as developed.

Women and children are the groups most vulnerable to poverty in the 21st century. Real Economy will ask why that should be and what can be done about it.

Firstly though, we have to distinguish between two different definitions of poverty.

Firstly , there are almost one billion people in the world living on less than two dollars a day. They have little food and water, no real housing, few clothes and no medicine.

For these people it’s a daily struggle to stay alive.
These people a living in ABSOLUTE poverty.

Secondly, there are those people who, in their respective countries, earn or receive, less than what is needed to maintain a minimum standard of living.

They may struggle to meet basic needs like food, housing and medical expenses.

These people are living in RELATIVE poverty, and it is these people, and people at risk of joining them, that Real Economy is looking at this week.

The EU’s goal is to bring 20 million people out of relative poverty by 2020.

But the financial crisis over the past eight years has put more people at risk of falling into poverty, especially women. A quarter of women across the EU are at risk of poverty or social exclusion (Eurostat).

Dominique Pitault lives on the outskirts of Paris and after 18 years working, part of that time as a director of a recreation centre, she lost her job.

“I lived on about 500 euros per month for 4 years, money I get from the government,” said Dominique. “I have a roof over my head. I pay 550 euros for rent for a 16 square metre studio. I get 300 euros a month towards my rent. After I paid all my bills I was left with just over a euro a day to live on.”

Dominique finally landed temporary work as a cook at Epicerie Solidaire of Montreuil in one of the most populated communities outside Paris.

Started by the Association Aurore in 2013, last year it helped 390 vulnerable families participate in its workshops and buy discounted goods from its shelves.

“There are around a thousand people a month who use the Epicerie Solidaire,” said the head of the organisation Valérie Normand. “Around one-in-five are people who have a job but who struggle to get to the end of the month. But I think that the crisis weakens the ones who are already on the edge, and makes their chances of improving their lives more difficult.”

With her temporary contract, Dominique now earns 800 euros a month – 20 percent below the French poverty threshold – a situation shared by more than eight million people across the country, more than half of whom are women.

That equates to 14.3 percent of all French women. Apply that same percentage across Europe and it would mean 45 million women at risk of poverty.

Data from Eurostat show that the poverty threshold varies across Europe. In Romania it’s just 103 euros a month. In Luxembourg it’s 1600, and in Rome it’s 786 euros.

France spends more than a quarter of its GDP on those at risk of poverty, above the EU Average of 19.6 percent.

It is therefore critical to reintegrate people like Dominique to ensure they contribute back to society.

Children at the sharp end

More children than adults live in poverty in Europe. They are paying the ultimate price for the precarious job situation of their parents. and of course government cut backs.

Real Economy went to Bulgaria to look at the situation in one of Europe’s poorest countries.

In the Bulgarian capital Sofia, 13 year-old Simon sits at a table drawing and colouring. It is one way of expressing his thoughts. Life has improved for him recently.

“Before we all lived in the same room. It was very humid and it was cold. It was full of insects. We did well to move. Now I feel better.”

The insecurity Simon feels has many roots, including his parents’ financial struggles. Moving house, staying in school and learning social skills, are all helping Simon to move forward. He and his parents have achieved this, helped by social workers from SAPI, an organisation linked to the National Network for Children, whose Policy Director is Dani Koleva.

“The government should support our organizations and social authorities to provide adequate services for vulnerable children and families, said Dani. “This needs a systematic approach. It requires the different sectors like education, health, social services to work together.”

More than half of Bulgaria’s children are at risk. Twenty-one European countries have seen their “at risk” numbers rise since 2008.

Experts say improving employment prospects and conditions, as well as benefits and services, could go a long way to helping children. Douhomir Minev is the Chairman of the European Anti-Poverty Network for Bulgaria:

And Dani Koleva of Bulgaria’s National Network for Children says that when people fall in to poverty, society loses too:

“Europe loses citizens who could contribute to the economy. The problem with poverty is that it really affects one generation to the next, so actually we are seeing that Europe is getting worse. It needs to be supported by real actions, with projects, programs and funding.”

Maithreyi Seetharaman spoke to Jana Hainsworth, the Secretary General of Eurochild – a network of organisations working with and for children across the continent.

MS: With women being so vulnerable (to poverty) it must have a massive impact on the issue – how do you see it?

JH: “There is a big gender gap across Europe today. And this is not only about women’s access to the labour market and the gender pay gap which is still very prevalent and I think what society needs is gender balance – not only in the labour market but also in our societies. Women are disadvantaged because there is discrimination prevalent throughout the labour market; also they are most likely to take career breaks and because they simply take more of the household chores and the caring which limits their availability.”

MS: “When you look at the amount of funding that goes into addressing this issue – its about 20 percent of European funding for example, we’re not really seeing that much of an impact are we?

JH: “I think its much more than funding – this is about mindset change and that has to come from bottom up. Of course the EU has a very very important role and it has had an important role not only on funding but also on legislative change, and what we are unfortunately seeing now in the current austerity and economic crisis, is that the pressure is off! They feel this is not a priority anymore. If we are going to deliver economic growth in the long term we need to keep the priority on equality between men and women. In the society there is this myth that its about lazy adults who don’t want to work and that is so much not the reality. They might not be able to hold down a job because they have, caring for elderly or caring for children, because of the transport challenges they have to get to work whilst also taking children to school. And our societies are not really constructed to support people to stay in employment over time.”

MS: More children than adults are in poverty in Europe. What does that say about our society?

JH: “The highest numbers are children growing up in households with parents who are either not working, but an extraordinary number of children are actually living in households with a parent who IS working. In the UK for example – the cost of childcare can take up to a third of the family budget. If you are left with two-thirds to pay for housing and all of the other services, it’s incredibly challenging to hold the whole thing together.”

MS: Are we just looking at one, or many lost generations if we keep going down this road?

Jana: “What we are talking about is the investment needed. The result of that early investment is seen 20 years down the line. We know that politicians are elected on a five year basis, and the cycle needs a long term vision. If we do NOT invest now then the consequences will go down not just this generation but the next generation and the next.”

MS: How would you do this ?

JH: “You could look at a child centered strategy that invests in older people because children and families are often dependent on older people’s not only care and support but also financial resources. Its really looking at society and community in general.
It is somehow linked to national policies but a lot is linked down to the bottom-up level of what is happening in our communities.

MS: For short term medium term long term goals What should those be?

JH: “If we have 26 million children living in poverty across Europe – something is wrong. So lets prioritise a target to reduce poverty and look at it then in a holistic way of how we reduce poverty across the areas not only resources and income support but also access to health, housing, education, leisure and sports, community spaces where children can grow and flourish.”

Click on the video above to see the whole programme.

All the data, unless differently indicated, comes from Eurostat

How to reduce child poverty in Europe?

How does your country rank in EU child poverty study?