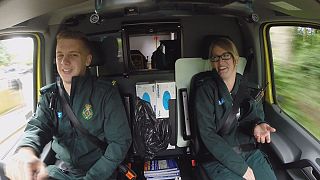 Every year all over Europe ambulances come to the aid of millions of people. A study suggests almost half of the cases could be treated on the spot and not need hospital care. On that basis a European research project aims to create a Smart Ambulance that can respond quickly and comprehensively to emergencies.

It is hoped that very soon medics will be able to give an accurate early diagnosis in the so-called he ‘golden hour’ after an incident that could decide the fate of the patient.

“The ambulance will be equipped in such a way with ICT technology, so the ambulance crew can actually work with people inside the hospital,” said Declan Henegan, editor of Ambulance Today Magazine. “That also means that the quality of the diagnosis made on scene within the ambulance is going to be more exact, and could mean that the patient goes to one hospital instead of another hospital.”

Currently, most ambulances are cramped and confined spaces with sometimes difficult access to equipment. That doesn’t help when trying to treat a patient’s injuries on the move, according to London-based paramedic Elaine Parris: “It’s not ideal to keep going here, standing moving, whereas, for instance (it’s better) if things are all available in front of you, easy to grab. The other thing we are unable to do is to get round the other side of the patient, even the cupboards don’t tend to open as much as they need to. I could then be putting myself right across the patient, who potentially could be vomiting.”

Researchers involved in the Smart Ambulance project created a prototype specifically designed to address those issues. Gianpaolo Fusari, a designer at London’s Royal College of Art demonstrated the layout to Futuris: “A digital diagnostic and communications system monitors the patient and sends data to hospitals.

“Putting the stretcher at the center of the ambulance allows the paramedics to treat the patient from all sides. Another innovation is these ‘treatment packs’. You just change the pack for a new one when it’s used,” he said.

The most crucial aspect of the smart ambulance is its ability to send and receive data, which helps medics make diagnostic decisions. Andy Newton, Chair at College of Paramedics expects this feature to be further enhanced in the future: “Technology is always moving forward, and at an increasing pace. I think we will see more use of internet enabled technologies, such as telemedicine We have in this project, also, the capability of carrying a mobile laboratory in the vehicle, to use diagnostics such as ultrasound, and X-ray technology is also on the horizon.”

It is hoped these ambulances will soon by offering a higher standard of potentially life-saving emergency treatment in many EU countries.

Do you know: what's the ambulance of the future?