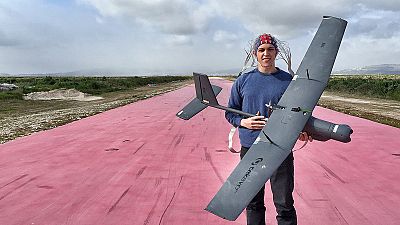 Mind control is the stuff of pure science fiction, but today reading data from your brain has never been more accurate, and that opens the way to, for example, controlling machines.

A recent drone flight from an airfield outside Lisbon may prove to be historic. Its flight was remotely controlled by the pilot’s mind. It’s an impressive result delivered by a European research project to develop technology to transform the lives of disabled people.

Like most drones, the unmanned plane receives radio commands from the ground. But instead of using a joystick and buttons, the pilot just thinks of the direction the plane should take.

“We’re switching from normal control to the “brain flight”. From this moment, it will be flown by the brainwaves of the pilot,” says Mendes.

The researcher at the controls focuses his attention on the screen with the parameters of the flight. It takes some mental effort to steer the drone in the required direction, keeping it within the designated area.

“Ideally, this shouldn’t be too difficult. With more training, we’ll be able to do more, and the piloting should become more intuitive,” says Nuno Loureiro, researcher at the BMI Champalimaud Foundation.

This technology is based on a brain-machine interface – a system that uses a set of electrodes applied to the scalp. Using specially-written software, the researchers can basically read the subject’s mind.

So how does the brain-machine interface actually work?

“We use a cap that captures from the skin surface the electrical activity that goes on inside the brain. We take those signals and transmit them into the computer which converts them into visible cursor movements that you can see on the screen,” says the Foundation’s Rui Costa.

As the pilot observes the screen, his brain learns electrical patterns that control the movements of the objects. Scientists say with more training, this can become as intuitive as driving a car.

“In principle, anyone can learn to do this,” continues Costa, “but it will ultimately depend on the person’s learning capabilities. Not everyone can be a pianist!”

This technology has already been tried in a full-size plane simulator. Researchers suggest that in the future, brain-machine interfaces may help to simplify control panels, shorten pilots’ training time and one day allow paraplegic people to fly planes.

“Besides aeronautics, we’re looking to apply this technology in many different areas: you can imagine right away applying this to wheelchairs, how you control a wheelchair with your mind. Or you can use it to control your everyday appliances at home,” suggests Ricardo Mendes.

From turning the lights on and off to typing emails or controlling prosthetic limbs with brain signals – all that and more can be made possible with further development of the brain-machine technology, which is still in its infancy and surely has more surprises to come.

Do you know: how will drones change the world?