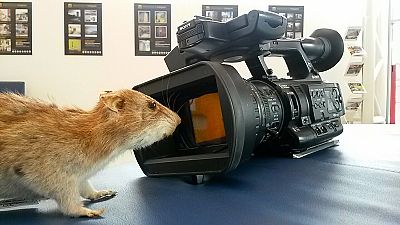 <p>Rats damage crops, buildings and infrastructure, costing billions of euros every year. They also carry more than 60 diseases that threaten humans and animals. </p> <p>But now scientists in Britain are using smart electronics to counter the danger. </p> <p><a href="http://www.aston.ac.uk/lhs/staff/az-index/tisdalmj/" rel="external">Professor of Chemistry Michael Tisdale</a> knows the rodent problem well. He has a small holding near Birmingham in central England where he keeps chickens. It has been invaded by rats who gnaw through anything to steal food from his animals.</p> <p>Professor Tisdale, who works at <a href="http://www.aston.ac.uk/" rel="external">Birmingham's Aston University</a>, told euronews the rodents are keen to get to the food he puts out for the chickens: “The rats come out in the night, they dig a hole, they get under the door, get inside, and they eat the food.” </p> <p>Like everyone, he uses poisonous pellets, but ordinary poisons don’t seem to help anymore. Professor Tisdale says the rats seem to enjoy some common toxins as free food: “The place is literally alive with them at night, even though we put poison down. They do eat the poison, but they seem to become resistant to it. That’s the main problem.” </p> <p>At Aston University they are working as part of a European research project called <a href="http://www.piedpiperglobal.com" rel="external">Piedpiper</a>.</p> <p>It takes a different approach: rather than waiting for the rat to eat enough poison to die, the new system sprays the rodent with a single deadly dose of toxin. </p> <p><a href="http://www.aston.ac.uk/lhs/staff/az-index/ingham/" rel="external">Drug delivery researcher Andrew Ingham</a> is working on the project: “This is one of the first commercial systems that will spray rats, and actually kill them through absorbing the toxin through their skin.” </p> <p>Scientists have created a vitamin D-based formula. It is safe for common animals but deadly for rats who can’t metabolise it. </p> <p>Experiments are being carried out to show how fast the toxin gets into a rat’s blood after it is sprayed. </p> <p>Andrew Ingham explains: “We perform all experiments in glassware in the laboratory to a model membrane that represents rat skin. Once we’ve optimised all the different formulations, we can then select out the best way of transferring vitamin across the skin.” </p> <p>To deliver the toxin, researchers have made an electronic device that uses light sensors to that when a rat runs through it the poisonous spray is triggered at exactly the right moment. A pheromone inside the device attracts rats in. </p> <p>The system detects when the rat gets right under the spray can. It is not triggered if the animal that enters is not a rat, or if two rats try to enter the device from both ends at the same time. </p> <p>Aston University Biomedical engineer Joseph Davies says the system can also be remotely monitored to make sure the poison is quickly replaced when it is all used up: “There’s a microprocessor on the circuit board. It gives an option for the device to send a signal or a message to the pest control officer to tell them to come and replace the can.” </p> <p>The current traps, known as multi-feed stations, use poison pellets and kill rats slowly and painfully by causing internal bleeding. The new device is more humane as the rats die of a heart attack one day after being sprayed. </p> <p>Drug delivery researcher Andrew Ingham says their product is more effective: “The multi-feed station means that animal can chose how much he wants to eat, and often doesn’t eat enough to kill him. Our prototype system has a single-shot formulation which means it’s guaranteed death once it’s been sprayed.”</p>

Do you know: why kill rats?