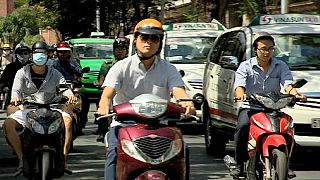 “Vietnam became a market economy in the early 1990s and has gone through an economic ‘boom’ over the last two decades. But amid the global financial crisis, and with a communist regime ruling with an ‘iron fist’, modernisation is happening at a slower pace than many in this country of 90 million would like,” reports Isabel Marques da Silva for euronews.

In 2012 the Vietnamese government began a privatisation programme to attract foreign investment. On the outskirts of Ho Chi Minh City is the Marou Chocolate factory, which was started by two Frenchmen. Buying only from small producers, they pay above the market price to ensure they get the best cocoa beans.

“Marou is a brand reflecting certain things: it reflects quality, authenticity, taste and working locally in Vietnam. We want to grow to be a large artisan chocolate maker, not an industrial chocolate maker,” said Vincent Mourou, co-founder of Marou Chocolate.

The chocolate is exported to top-of-the-range markets from Sweden to Singapore. Concepts like design and environmental sustainability are important.

“For the first time they put something like the French ‘AOC’ system – appellation d’origine contrôlée (‘controlled designation of origin’) – for the Phú Quốc Fish Sauce. I think that the European Union had a lot to do with this. I think that shows an interesting trend, pointing towards more recognisable quality products from Vietnam,” said the company’s other co-founder, Samuel Maruta.

Like many communist countries opening up to capitalism, Vietnam has a growing middle class hungry for consumer goods. The EU and the US are competing for a free trade agreement. Brussels started negotiating in 2012, and last year sent a delegation to Vietnam to develop local partnerships.

“If we want to help our companies (protect themselves) against relocating, we must help them become more international. Unfortunately, only 13 percent of small and medium-sized European firms (SMEs) operate beyond European borders,” said Antonio Tajani, the European Commissioner for Industry.

The EU has invested almost four million euros in a new legal support centre for European SMEs. It has just opened in Ho Chi Minh City. A major challenge is adapting to Vietnam’s one-party system, renowned for repressing political dissent and religious freedom. Journalists denouncing corruption have found themselves jailed.

“If you look at things like freedom of expression, it is a very difficult country. If they want more European investment they have to look at these issues because a European investor coming here does not look only at the economic framework, but also looks at the broader social and political framework,” explained the EU Ambassador to Vietnam, Franz Jessen.

Another sector with big potential is tourism: the country welcomed more than six million visitors in 2013, one million from EU countries. Brussels has signed a cooperation agreement, but the Vietnamese want Europe to reciprocate by easing its visa rules.

“I hope that the cooperation between the EU and Vietnam will not only be in one direction. We want to have support from the EU but we also want to have a higher number of Vietnamese tourists entering EU countries,” Nguyen Van Tuan, Chairman of Vietnam Tourism, told euronews.

The European Union might open its doors to tourists for specific events, like the Euro 2016 football tournament in France, and next year’s World Expo in Milan. But the main goal is gaining access to Vietnamese markets such as developing resorts and tourism.

“It is a big industry, it’s investment, it’s equipment production, it’s know-how transfer, it’s a lot of education – and on the other side, it is of course a big, big opportunity for exchange also in sports, culture and some other sectors,” argued Janez Sirse, President of the International Tourism Institute.

Oriberry is a new coffee brand created in 2007 by a community developer within an NGO. It allows small producers to earn more income by cutting out large distributors. They get a share of a rapidly growing market. Vietnam is now the world’s second largest coffee exporter, behind Brazil.

“My dream for Oriberry is that we could have some coffee producers in different areas of Vietnam, having their own brand, having their own shops. That would create some opportunities for them, and for us also, to have more research on coffee,” said the Director of Oriberry Coffee, Dao Tran Phuong.

Nearly four decades after the end of the Vietnam war, although the communist leadership’s grip on power remains firm, little by little the economy continues to open up.