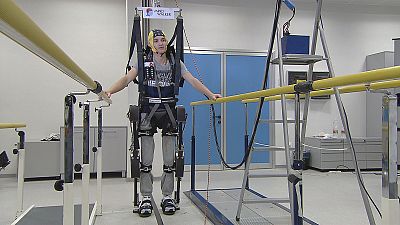 <p>Nineteen-year-old Marius Ciustea suffers from paraplegia after a recent skiing accident. He is now paralysed from the waist down.</p> <p>In recent times he has found some cause for optimism. It is in the form of a new exoskeleton, which helps him to get upright and hopefully walk::</p> <p>“I’m happy because I can stand up again, I’m able to walk again, to move around a bit. I hope some sensation and strength will return to both my legs, eventually.”</p> <p>The exoskeleton that is helping Marius and other victims of paraplegia has been developed and tested by scientists from a European Union research project. </p> <p>Both physical therapists and neurologists see enormous advantages in the prototype. </p> <p>Federica Tamburella is a physical therepist from the Fondazione Santa Lucia Hospital in Rome:</p> <p>“With conventional rehabilitation techniques, these patients would not be able to walk along these parallel bars without any kind of help. It would be absolutely impossible for them to regain the sensation of walking. This exoskeleton allows these patients to get the sensation in a natural, physiological way. The exoskeleton allows the patients to move their hips, and these hip movements are absolutely key in all conventional rehabilitation techniques”. </p> <p>Marco Molinari a neurologist, from the same hospital spoke of the barriers his patients need to overcome: </p> <p>“Walking again is fundamental for these patients from a psychological point of view. For them it makes a huge difference to leave the wheel chair, just for a short time, and have an adult view of the world instead of the sight height of a child, and being able to stand up again and to look at other adults in the eye.” </p> <p>Researchers are looking even further. They dream of helping victims of paraplegia to walk again by controlling exoskeletons on their own… with their brains. </p> <p>An ambitious aim, full of challenges. </p> <p>Michel Ilzkovitz a telecommunications engineer,at Space Applications Services Mindwalker project said: “Ideally, we would like to develop a system that is able to control the exoskeleton just by capturing the signals coming from the patients brain cortex. We are still not able to achieve that, for a number of reasons. First we have the skull barrier. The skull stands between the brain signals and the instruments developed to measure them. That means that often the signals we get are not neat, nor clear enough to be used. We then have the difficulty of dealing with the vibrations created by the exoskeleton itself. This constant noise disturbs the quality of the brain signals we get and it makes it difficult to use them”. </p> <p>To overcome the difficulties, researchers are looking for shortcuts to the brain. One such shortcut is through the eyes. They are working to help the retina to stimulate the brain, so they can identify and isolate the brain signals to potentially control the exoskeleton. </p> <p>Guy Cheron, a neurophysiologist at the Université Libre de Bruxelles, gives a clue as to how that can achieved: “We know that the signals we are sending to the eye arrive to the retina in a given wavelength. The brain then has to match the wavelength to be able to read those signals we send. As we, researchers and neuroscientists know these wavelengths, we can eventually filter them from all signals coming from the brain, and to retain only the waves with that particular wavelength And those are the brain waves that can eventually be used to control the exoskeleton.” </p> <p>It is complex research that scientists hope will provide reasonable solutions, to victims of paraplegia in the short to medium term. </p> <p>Michel Ilzkovitz telecommunications engineer, from the Space Applications Services Mindwalker project:</p> <p>“We foresee the marketing of a system like this in around three to five to five years at the earliest. But before that we have to make the whole system stronger, easier to use, and also less expensive to produce.” </p> <p><a href="https://mindwalker-project.eu">mindwalker-project.eu</a></p>