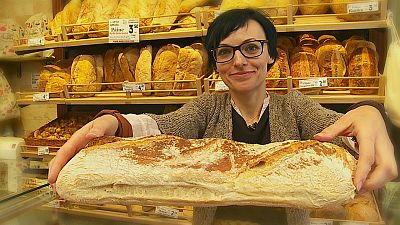 <p>This edition of Business Planet takes us to Timisoara, one of Romania’s three major economic hubs, a very dynamic region virtually devoid of unemployment. </p> <p>Entrepreneurs in the region are not short of ideas on how to develop their businesses. The Prospero bakery is an example. </p> <p>Founded in 1991, the company has experienced massive growth. It now employs 180 people, and turnover last year reached five million euros. Four years ago, the company invested heavily in a brand new building, state-of-the-art machines and six new delivery lorries. </p> <p>To get the funds needed to develop her business, Adina Bugescu, whose parents founded the bakery, turned to the Chamber of Commerce and Agriculture. Its consultants are members of the Enterprise Europe Network. They worked on a business plan together and Adina secured a European grant worth 750,000 euros. </p> <p>“This helped us increase our productivity and make sure we complied with European standards. Between the time the investment was made and today, turnover has increased by 25 percent and we have hired 60 people,” says Adina Bugescu, co-owner of the bakery. </p> <p>For more than 20 years, the Bugescu family’s bakery has been making bread that is 100 percent natural, without preservatives or premixes – a choice that apparently appeals to customers. </p> <p>Adina wants to develop the business further. </p> <p>“Today, we have 14 bakeries. The aim is to open up more, to increase productivity and production. And we have another dream: we want to start a baking school,” she told us. </p> <p>The Enterprise Europe Network, which has representatives all over Europe and in the rest of the world, helps <span class="caps">SME</span>s like Adina’s get European funding and access new markets through seminars and missions. </p> <p>Octavian Culda, the <span class="caps">EEN</span> consultant in Timisoara, told euronews: “We take part in three or four missions abroad each year through the European Enterprise Network – throughout the European Union, and in the past two years, in the United States as well.” </p> <p>Adina has this advice for anyone seeking to expand their business successfully: “The keys to success are: to clearly identify what you need funding for before seeking it. Then you need to find a consultant who understands the philosophy of your business.”</p>