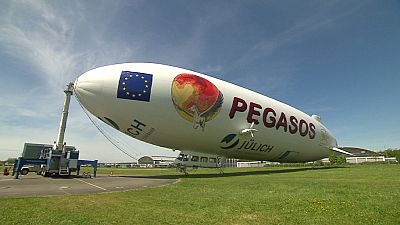 <p>Scientists in Germany are trying to fill in the gaps in the current understanding of climate change. </p> <p>Physicist at the Paul Scherrer Institute in Switzerland, Bernadette Rosati, told euronews: “Most people think climate change means global warming, but climate change can also mean the opposite.” </p> <p>Dr Thomas F. Mentel a leading physicist at Germany’s Jülich Institute said: “We have basically focused on reducing air pollution for a long time, but it seems climate change is much more complex than that alone.” </p> <p>The Institute’s Dr Mikael Ehn added: “There is quite a bit known. But also many things that we know that we don´t know well enough.” </p> <p>The scientists, from a European Union research project, want to understand the relationship between atmospheric pollutants and climate change. </p> <p>So they got themselves a zeppelin. </p> <p>Mentel went on: “The most important layer of the atmosphere is the lowest two kilometres. That is where we live, where the vegetation is, and where most emissions go. The majority of measurements in that part of the atmosphere are normally done from the ground. We could also use planes. But planes fly high and very fast. The zeppelin is slow moving – maybe 50 km/h – and we can explore from a stable, vibration-free platform, all levels up to 2000 metres.” </p> <p>The zeppelin has been loaded with heavy equipment, specially designed to absorb and analyse aerosols, tiny chemical particles that float in the atmosphere. </p> <p>They can be natural or man-made, and researchers know that they contribute to changing the pattern of our climate. </p> <p>But how they do it is still far from clear. </p> <p>“One example is sulphur dioxide emissions. For a long time, the aim was to reduce sulphur dioxide because it contributed to “acid rain”, and we have been successful here in Europe and also in America in reducing these emissions,” Dr Mentel told euronews. “At the same time, SO2 is an important precursor of aerosols. We know that aerosols affect cloud formation and by doing so they can contribute to the cooling of the atmosphere. So by reducing sulphate-aerosols we run the risk of suppressing an effect which actually works against climate warming.” </p> <p>Scientists use test flights to check that their equipment will work properly under real research conditions.</p> <p>“The zeppelin flies at a few hundred metres above the forest at different altitudes, because it is important to see how the instruments work at different air pressures,” Dr Mentel explained.</p> <p>The zepellin will cross Europe overflying countries from north to south in three different stages.</p> <p>The team will collect samples over various landscapes and environments, analysing aerosol particles of differing sizes and properties at several altitudes, pressures and temperatures.</p> <p>The scientists are particularly interested in what they call “the detergent of the atmosphere”, a natural chemical compound that triggers the degradation of pollutants and improves air quality. </p> <p>But they also want to understand the exact proportion of natural and man-made aerosols. </p> <p>Dr Mikael Ehn said: “In the Netherlands and in Italy we will fly over areas that have a lot of people and a fair amount of industry. So we expect to find a fair amount of anthropogenic (man-made) pollution. Next year when we are flying to Finland and almost to Lapland, we expect much more natural biogenic emissions. So before we can understand what humans are doing to contribute to higher aerosol loadings, we also have to really understand the biogenic sources.” </p> <p>Initial tests went well, and the zepellin returned to the hangar for a change of equipment. <br /> Some instruments are replaced by new machines, as each atmospheric particle needs specific equipment to be observed and analysed properly. </p> <p>Jülich Institute chemist, Florian Rubach showed euronews an aerosol mass spectrometer on the airship. “With this machine we can analyse the chemical composition of particles between 50 and 1000 nanometers,” Rubach explained. “Thus we are able to find out whether they are of organic origin or whether they contain ammonium or nitrates, and then they are of human origin”. </p> <p>Rubach also described how air samples are taken. “These are not sensors. They are just plain stainless steel tubes, where we suck in air samples, in my case, 300 millilitres per minute. And then we analyse the air collected in the instruments.” </p> <p>All the equipment has to be shoe-horned into the limited space on board. </p> <p>“Inside the zeppelin you can see some of our instruments to measure aerosols. There is an instrument from our Swiss partner that measures the absorption of water in aerosols, a crucial element in cloud formation,” said Dr Mentel.</p> <p>“There are instruments for carbon monoxide, nitrogen oxide and ozone. These instruments have the basic function of identifying the photochemical activity of the air mass.</p> <p>“And last but not least, there is our main aerosol instrument that measures the distribution of particles according to their different sizes.” </p> <p>The biggest challenge for researchers was to fit their complex equipment into an already sophisticated airship where rules on size and weight have to be strictly adhered to. </p> <p>Bernadette Rosati explained: “I measure particles a bit bigger than the average. My challenge is to grab lots of these particles, so the statistics I collect can be relevant. All the tubes have to be very short, conductive and very smooth so we don’t lose any particles before they come to be measured. And the pumps and tubes have to perform well under different air pressures.” </p> <p>It took three years of preparation to get the Zeppelin ready for an extensive tour of Europe’s atmosphere. </p> <p>Dr Mentel’s expectations are flying high. </p> <p>“Our final goal is to create regional models that will predict the developments of climate change and chemical changes in the atmosphere on a scale of around 500 kilometres.”</p>