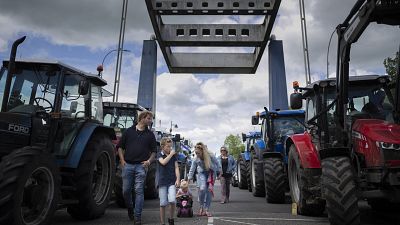 Dutch farmers began a day of protests in the Netherlands on Monday by blocking supermarket distribution hubs in several cities.

They are angered by government plans that may require them to use less fertilizer and reduce livestock. Amsterdam's Schiphol airport and KLM, the Dutch arm of Air France, advised travellers to use public transport, rather than cars, to reach the airport, as farmers' activist groups said on social media they planned to use tractors to block roads.

Several traffic jams were reported on highways in the east of the country and on ferry routes in the north, but none near Schiphol during the morning commute.

Why are farmers in the Netherlands angry?

At the heart of the protest are targets introduced last month to halve harmful nitrogen compounds by 2030. It is the latest attempt to tackle a problem that has plagued the country for years.

The government says that emissions of nitrogen oxide and ammonia, which are produced by livestock, need to be drastically cut - particularly near a protected network of habitats for endangered species that stretches across the EU.

The reforms are expected to include reducing livestock and buying up some farms whose animals produce large amounts of ammonia.

Farmers argue they are being unfairly targeted, giving them little hope for the future of their profession.

Why does the Netherlands need to reduce its nitrogen emissions?

Reductions in emissions of nitrogen oxides from farm animal manure and from the use of ammonia in fertilizer, are necessary the government says. It estimates a 30 per cent reduction in the number of livestock is needed.

High-intensity farming of cows, pigs and other animals has made the Netherlands Europe's leading emitter of the substances. Construction and traffic also contribute.

Dutch and European courts have ordered the Dutch government to address the problem. Farmers say they have been unfairly singled out and have criticised the government's approach.

Dutch fishermen have joined farmers in protesting nitrogen emission targets. In Harlingen, they blocked the port with trawlers meaning ferries to the islands of Terschelling and Vlieland could not leave for hours.

Shrimp fishermen in particular fear that they will run into problems due to the government's emission targets.

As of next year, they will need to apply for new fishing permits. Without the necessary adjustments to their trawlers, the permits could be withheld. It would mean they would no longer be allowed to do their jobs.,

Watch the video to see how farmers and fishermen blocked roads in the Netherlands.