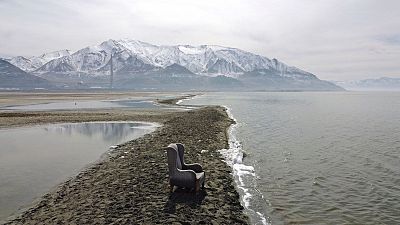 The Great Salt Lake of Utah in the American West is on the verge of becoming an environmental disaster zone, locals warn.

It has already shrunk by two-thirds since the 1980s, from around 8,547 square kilometres to just 2,590, US Geological Survey data from last summer shows.

Climate change and the siphoning of water from its mountain source are behind this alarming evaporation. The population of Salt Lake City has exploded in recent years, meaning more and more of the mountains’ snowmelt is being diverted from rivers to homes and farms.

If the lake continues to dry up at this rate, the ecological and human impacts will be disastrous.

The lake bed’s soil contains a cocktail of heavy metals, which when exposed to wind storms will drive arsenic into the lungs of nearby residents. Three-quarters of Utah’s population would be affected by the poisonous air.

“We have this potential environmental nuclear bomb that’s going to go off if we don’t take some pretty dramatic action,” Joel Ferry, a Republican state lawmaker and local rancher told the New York Times.

A glimpse into the future lies 966 kilometres southwest, the ground zero of California’s Owens Lake. It dried up decades ago, transforming into America’s worst source of dust pollution.

Owens Lake disappeared when Los Angeles built an aqueduct on its tributary in the early 1900s. Even now, the wind still kicks up PM10 - harmful particulate matter 10 micrometres or smaller - which is breathed in by the few remaining residents in the ghost town. It’s a grim precedent for Utah, a haunted picture of what’s in store if the drought and human overreach continues.

What is the environmental impact of the Great Salt Lake’s disappearance?

Still the largest saltwater lake in the western hemisphere, for now, the Great Salt Lake is at risk of becoming too salty as its water levels drop.

America’s Dead Sea, as it’s also known, provides a precious habitat for millions of native and migratory birds, including the largest population of the wading bird Wilson’s phalarope.

If the salt content rises much further, to around 17 per cent, it will be too much for the algae in the water, threatening the flies and brine shrimp that feed on it. This will have knock-on effects for the 10 million birds that stop by the lake every year.

And though the soil exposed by the retreating lake is mostly protected by a hard crust, it’s a matter of time before it exposes metal contaminants from mining, like copper, embedded in the ground.

How can the Great Salt Lake be saved?

The salt lake is part of a delicate system. Every summer it drops by around 0.6 metres, before the snowmelt from the mountain replenishes it in the spring.

But global warming is causing more of the snow to evaporate before it reaches the region’s three rivers. It is also driving up demand for water from people anxious to feed their crops or maintain their lawns.

The shrinking lake means that less water is absorbed by passing storms and deposited as snow on the mountains in the ‘first’ place.

With the water cycle changed by human actions both far and near, saving the Great Salt Lake means letting more snowmelt flow into the lake.

Demand for water in Salt Lake City could outstrip supply as soon as 2040.

But that’s easier said than done when Salt Lake City’s water resources are already under considerable strain from the growing population. Demand could outstrip supply as soon as 2040.

Addressing what has become a political issue, state lawmakers recently made it mandatory for cities and towns to include water in their long-term planning, as well as funding a study of water rights. But they blocked measures that would have had a more immediate impact, such as enforcing water-efficient sink and shower regulations in new homes.

They also baulked at increasing the price of water, despite Salt Lake having some of the lowest water rates in the US.

Laura Briefer, director of Salt Lake City’s public utility department added that - without taking less of the lake’s water - there are two other ways to increase the supply: recycling more wastewater, or drawing more groundwater from wells.